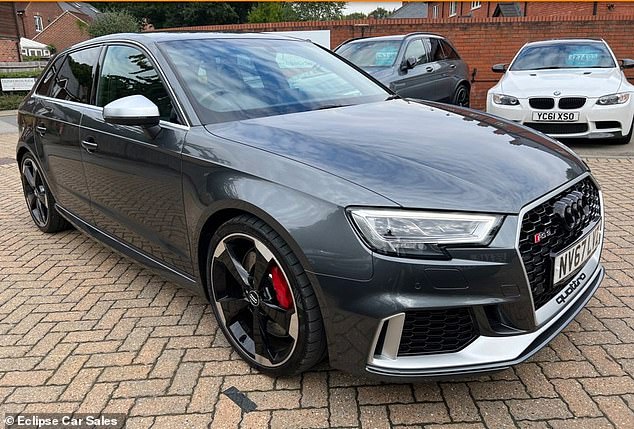 Detectives release CCTV in hunt for woman after £35,000 high-powered Audi was STOLEN from a garage when customer asked to take it for a test drive and didn’t return

By Dale Fox For Mailonline

A high-powered car worth £35,000 was stolen from a car dealership after a woman asked to take it for a test drive but didn’t return.

CCTV pictures show her before she took the high-powered grey 2018 Audi RS3 Sportback for a spin and drove off into the distance.

The vehicle, which has the registration NV67 LVZ, was stolen from Eclipse Car Sales in Winchester, Hampshire, on the afternoon of November 26.

Hampshire Constabulary was today trying to locate and question the woman.

An image of the stolen Audi RS3, which was taken last Saturday from Eclipse Car Sales in Winchester, Hampshire, with the registration NV67 LVZ

The woman who allegedly took the Audi RS3 is seen in a CCTV grab on November 26, just before the car was driven away and not returned

Internal view of the powerful Audi RS3 Sportback, which was allegedly stolen from a car dealership last weekend

It appealed to anyone who recognises her to get in contact.

‘Officers investigating the incident are keen to identify the woman in this image,’ Hampshire Constabulary said in a statement.

Reviewing the RS3 in 2017 for the Mail on Sunday, Chris Evans wrote: ‘Once fired up, the new lightweight 2.5-litre, five-cylinder turbo is happy to rasp with the best of them, sounding like the precocious love child of a ménage à trois between a Ferrari 458, Aston Martin Vanquish and Mercedes-AMG C63.

‘The most fun I found was letting her slip into seventh in auto and then jumping on the throttle. This seems to take the Audi by surprise, necessitating the need for a huge gulp of air, followed by a dramatic Hitchcockesque pause before everything frantically explodes into action and… whoosh, off you go.’

The stolen model came with a host of extras, including diamond-cut alloy wheels, privacy glass, a virtual cockpit, racing-style paddle gears and a 394 bhp 2.5 litre engine.

Pictured: CCTV images showing the woman police are trying to find after she took an Audi RS3 for a test drive and didn’t return with it

Anyone with information that could assist the investigation is asked to contact police on 101 or visit Hampshire Constabulary’s website, quoting reference 44220480412.