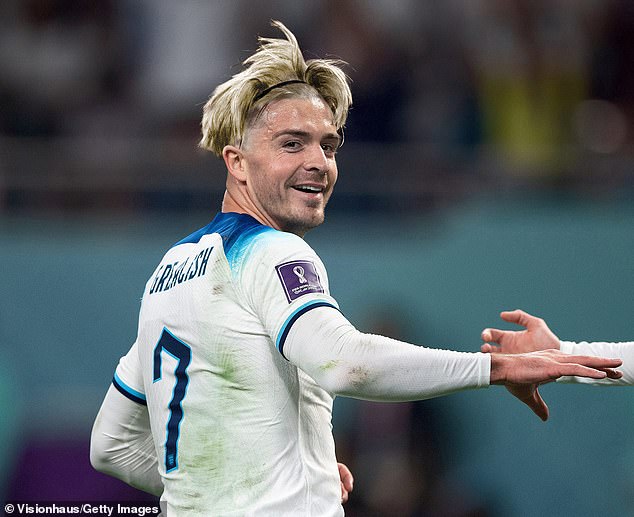 Hair we go! England stars pre-match ritual involves getting a trim together the night before

By Molly Clayton For Mail On Sunday

England stars were last night going through one of their pre-match rituals – having a haircut.

Celebrity barber Ahmed Alsanawi told The Mail on Sunday that the squad like to get their hair done the night before a game.

Alsanawi, who was previously Chelsea FC’s training ground barber, said that 27-year-old Jack Grealish might even go bleach blond if England reach the final – and he might be able to convince a few others to do something drastic.

He said: ‘We have been cutting the likes of Marcus Rashford, Jack Grealish and Phil Foden for years now. I get flown out by whoever needs me. I also work closely with the Belgium team.

‘Next week, I’m booked up by the England team and the France team and whoever then gets through.’

How Jack Grealish might look if he goes beach blond, as celebrity barber Ahmed Alsanawi suggested he might do if England reach the final

Alsanawi, who owns A Star Barbers, in Chessington, Surrey, said: ‘I did the new lines on Foden a few weeks ago and Grealish’s highlights. I always cut them the day before the game. I wish it could be the morning so that they look even fresher, but obviously they’ve got to be focused and make sure they’re training.

‘They perform in front of millions of people, so their image is very important.’

He added: ‘I told Jack Grealish I am going to bleach his hair if they reach the final.

‘I’ll be able to convince someone to do something mad for the final, I’m sure.’

Alsanawi might be a good luck charm – he said that during the last World Cup tournament he cut the hair of French players who went on to win the 2018 World Cup.

Another celebrity barber, Sheldon Edwards, who owns HD Cutz in Clapham, South London, is also out in Qatar to cut the hair of players and TV pundits.