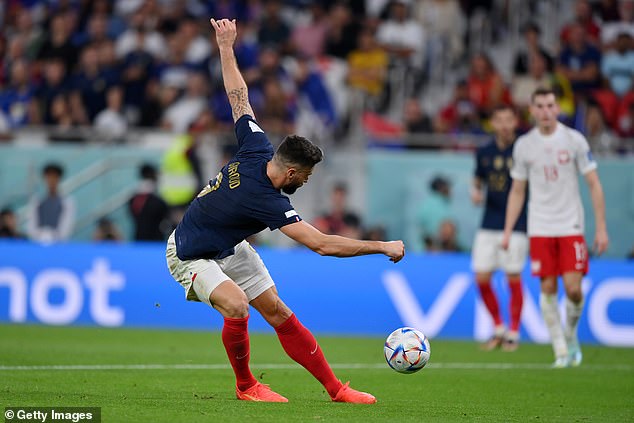 Olivier Giroud made history on Sunday by taking the title of France’s all-time top goalscorer by finding the net against Poland at the World Cup.

The AC Milan striker was level with Thierry Henry coming into France’s fourth match of the tournament, and became the outright holder after his goal at the Al Thumama Stadium.

Giroud, 36, scored his first international goal in France’s friendly win over Germany in February 2012, and over the past decade, he has climbed through the rankings, getting his 52nd goal for his country against Poland with a simple, classy finish to give Les Bleus the edge in the last-16 clash.

Speaking to the BBC at half-time in the Poland match, retired French defender Laura Georges said: ‘He’s underrated, it’s true. You have to give him respect, he didn’t score any goals at the last World Cup, but he’s made space for other players. He’s been working well, he deserves it.’

Fellow pundit Rio Ferdinand added: ‘He knows what he’s good at, and he executes.’

The former Arsenal and Chelsea man was part of the French side that won the World Cup in Russia four years ago, and was also involved when France finished runners-up in the European Championships in 2016.

Throughout more than a decade with France, he has made 116 appearances, scoring just one hat-trick, against Paraguay in a friendly in June 2017.

He has netted ten additional braces, including his duo of goals in their 4-1 win over Australia on Tuesday, which took him to a half-century of goals for Les Bleus.

His 50th goal in international play came five years after his 25th goal, which was a milestone he achieved with the second of the hattrick against Paraguay in 2017.

The most number of goals he has scored against any country is four, netting that many against both Iceland and Australia.

Henry broke Michel Platini’s record in 2007, and finished his career with 51 goals for France

Henry, who is currently assistant coach for Belgium at the World Cup, scored 51 goals for France between 1998 and 2009. He surpassed the previous record holder, Michel Platini, during a European Championship qualifier against Lithuania in October 2007.

Antoine Griezmann is third on the list with 42 goals, one ahead of Platini, while Karim Benzema is fifth on 37 goals.

There are four women to have scored more goals for France than Giroud, a table topped by Lyon’s Eugenie Le Sommer with 86 goals from 175 caps.