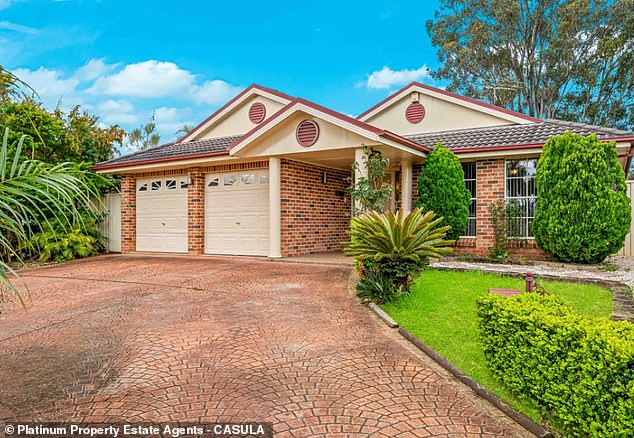 Australians hoping higher interest rate rises would bring property prices down have little to celebrate with $1million still only fetching a modest house.

Just three years ago, $700,000 easily bought a house near a Gold Coast beach but prices in one suburb are still 40 per cent higher than they were three years ago – even during a downturn.

At a pinch, it was just enough for an outer suburban Sydney house or a home with a backyard near the city in Melbourne or Brisbane, provided someone was willing to buy something in need of renovation.

Now, those same category of properties are fetching close to seven figures, as professionals who could work from home relocated to the beach outside a big city or bought a bigger house in the suburbs.

This phenomenon was turbocharged after the Reserve Bank slashed interest rates to a record-low of 0.1 per cent and left them at that level for 18 months until inflation became a problem.

And with interest rate rises tipped to continue at least through next year, the typical house is becoming an increasingly unaffordable pipe dream for first-home buyers, because monthly repayments have climbed by a third in only six months.

‘While house prices are declining, rising interest rates over 2022 and any further rate rises in 2023 mean affordability for new borrowers is poor and will remain so over the next year,’ it said.

A $1million home would now barely be affordable for a couple earning $150,000 between them, after seven interest rate rises reduced the lending capacity of the banks.

Strong price rises, when interest rates were still at a record-low of 0.1 per cent, meant the downturn that started this year would be unlikely to undo those gains and make housing more affordable.

Westpac is expecting Sydney and Melbourne house prices to plunge by 18 per cent in 2022 and 2023 as a result of rising interest rates.

ANZ is expecting capital city prices to fall by 18 per cent, from the peak in 2022 to the trough in 2023, before staging a 5 per cent rise in 2024, when interest rates start coming down again.

Economists Felicity Emmett and Adelaide Timbrell said investors could be among the first to get back into the housing market.

‘While we can’t discount the possibility of a sharper downturn, the tightness in the market evident in low vacancies and high rental growth suggests investors may chose to re-enter the market in greater numbers than we currently anticipate,’ they said.

‘There is clear interest from overseas for housing in Australia, particularly from India.’

The Gold Coast has seen some of Australia’s biggest increases with the median house price at Biggera Waters (pictured) in three years surging by 39.9 per cent to $955,150 from $682,665

Sydney, Australia’s most expensive capital city market, had a median house price of $1.243million in November, following an 11.9 per cent fall from the the peak in April because of rate hikes, new CoreLogic data showed.

So a $1million house, while considered upmarket everywhere else in Australia, would be in the lower half of the Sydney market even during a downturn.

While Sydney house prices have risen sharply, suburbs near the beach in a similar price bracket have done even better.

The NSW Central Coast an hour north of Sydney also had strong gains.

Melbourne offers much better value for those wanting a house near the city with Footscray having a median price of $986,330, and it’s only 7.5km from the central business district

Where prices have fallen this year

Melbourne offers much better value for those wanting a house near the city with Footscray having a median price of $986,330, and it’s only 7.5km from the central business district.

In Brisbane, Annerley has a median house price of $951,257, with this suburb of older Queenslander homes only 6km from the city centre.

Across Australia, a $1million house would now barely be attainable for a dual-income couple, earning $150,000 a year between them.

A typical family that could borrow close to $1million just six months ago can now only get a loan for $781,200, leading to sharp house price drops with more pain to come.

Back in early May, when the Reserve Bank cash rate was at a record-low of 0.1 per cent, a couple with two children on a combined income of $150,000 could borrow a maximum of $995,800, a RateCity analysis showed.

The latest November increase means this same family’s borrowing capacity would have fallen by 22 per cent or $214,600 drop since the Reserve Bank’s tightening cycle began in May.

This was the most in a row since the Reserve Bank began publishing a target cash rate in 1990, and almost every economist is forecasting an eighth increase next week.

Lenders since November last year have been required to assess a borrower’s ability to cope with a three percentage point increase in variable mortgage rates under Australian Prudential Regulation Authority rules.

Reserve Bank of Australia Governor Philip Lowe on Monday apologised to borrowers who took out mortgages after he had repeatedly suggested the cash rate would stay on hold at 0.1 per cent until 2024.

‘I’m sorry that people listened to what we’d said and acted on that and now find themselves in a position they don’t want to be in but at the time, we thought it was the right thing to do,’ he told a Senate economics hearing on Monday.