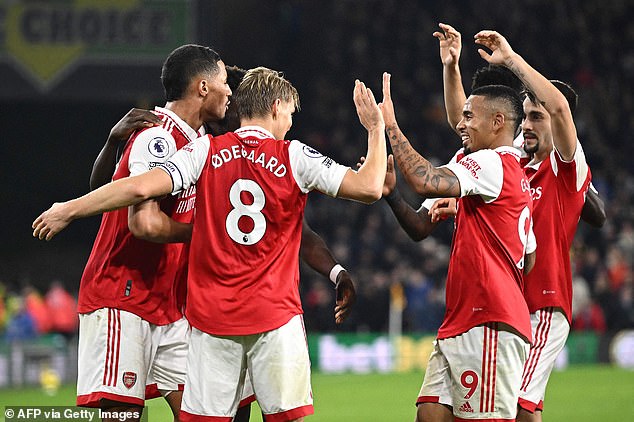 Arsenal’s midweek top of the table clash with Manchester City will be shown on Amazon Prime, while the Merseyside derby between Liverpool and Everton will be on a Monday night… as Premier League’s February TV fixtures are released

Arsenal’s top of the table clash with Manchester City will be shown live on Amazon Prime on February 5 as the TV schedule for February’s Premier League fixtures is released.

Arsenal are currently topping the Premier League table on 37 points but Pep Guardiola’s side are beginning to close in on the Gunners – sitting just five points behind their competitors.

Meanwhile, the Merseyside derby between Liverpool and Everton will be shown live on Sky Sports on Monday February 13. The two sides sit at different ends of the table but their derbies are always fiercely contested.

Manchester City’s trip to Tottenham will now take place on February 5 at 4.30pm. Their fixture against Aston Villa has also been changed to February 12 at 4.30pm.

City’s game against Bournemouth at the Vitality Stadium on February 25 has been pushed back. This will now take place at 5.30pm and it will be aired on Sky Sports.

Three of Manchester United’s February fixtures have been rearranged. The Red Devils will take on Crystal Palace as planned but their games against Leeds United, Leicester City and Brentford have been rescheduled.

United will take on Leeds at 2pm on February 12, with the Premier League clash being shown live on Sky Sports. The Red Devils will then face Leicester at Old Trafford on the following Sunday at 2pm.

United’s final Premier League match of the month, against Brentford, will take place on Sunday February 26 instead of Saturday February 25, but won’t be aired in the UK.

Two Friday Night Football fixtures have been added to the schedule with Chelsea facing Fulham on February 3 and Wolves travelling to Craven Cottage on February 24.

Other notable fixtures on Sky include Tottenham’s game against West Ham and Chelsea on February 19 and February 26. Meanwhile Aston Villa vs Arsenal will be aired on BT Sport on February 18.