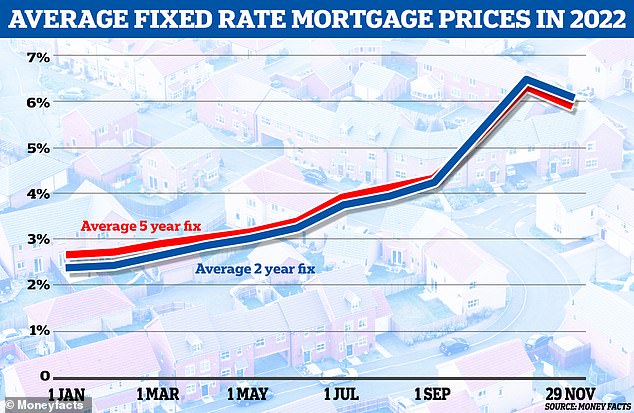 Average two-year fixed rate mortgage falls below 6% for the first time in two months… but some best buys are now charging as little as 4.6%

By Fran Ivens For This Is Money


The average two-year fixed rate mortgage rate has dropped below 6 per cent for the first time in two months, data from Moneyfacts reveals.

The average rate for two-year deals is now 5.99 per cent, the lowest since early October when rates rose sharply in the wake of the cataclysmic mini-Budget.

For five-year fixed deals the average rate is now 5.78 per cent, after they dropped back below 6 per cent two weeks ago.

Both averages had surged to over 6.5 per cent in mid-October. However, the best deals available now charge interest as low as 4.6 per cent.

Return to stability? Mortgage rates have steadily fallen in recent weeks, since peaking in late October in the wake of the mini-Budget

The continuing fall in swap rates is driving further improvements in fixed rates. Swap rates are an agreement in which two counterparties, such as banks, agree to exchange one stream of future interest payments for another, based on a set amount.

Rachel Springall from Moneyfacts said: ‘It appears lenders are slowly making reductions to their fixed pricing to adjust their positions, and in doing so, the overall average two and five-year fixed mortgage rates now sit below 6 per cent.

‘In the weeks to come rates could fall further, particularly if mortgage lenders have targets to meet as we edge closer to the end of 2022.

‘As the mortgage market remains volatile, it is vital borrowers seek independent advice to consider the deals on offer to them, or whether they need to be a little patient in hopes rates will fall further.’

For a mortgage on the current UK average house price of £296,000, the drop would mean an £88 reduction in monthly payments for a two-year deal and a £97 monthly saving on a five-year deal, based on a 25-year term.

However, while this is good news for borrowers, rates are still well above where they were in the summer and soaring above last year’s lows, leaving many fearing a mortgage shock for borrowers whose fixed rates are coming to an end in the next year.

Half of UK homeowners are on a fixed rate mortgage ending within the next two years.

In July last year, HSBC was offering a two-year fixed rate at 0.99 per cent, for those with a 40 per cent deposit or equity. Santander and TSB were offering similar deals, while the lowest rate offered was 0.87 per cent from Nationwide.

Since then mortgage rates have shot up rapidly.

On 1 August 2022, roughly a year later, the average two-year fixed rate across all deposit sizes was 2.52 per cent, according to data from Moneyfacts.

However, average fixed rates for both two and five year mortgages have steadily fallen since.

Most now expect mortgage rates to settle somewhere between 4 per cent and 5 per cent next year, despite the likelihood of successive Bank of England rate rises as the Monetary Policy Committee continues to act in an effort to fight inflation.

What to do if you need a mortgage

Borrowers who need to find a mortgage because their current fixed rate deal is coming to an end, or because they have agreed a house purchase, should explore their options as soon as possible.

What if I need to remortgage?

Borrowers should compare rates and speak to a mortgage broker and be prepared to act to secure a rate.

Anyone with a fixed rate deal ending within the next six to nine months, should look into how much it would cost them to remortgage now – and consider locking into a new deal.

Most mortgage deals allow fees to be added the loan and they are then only charged when it is taken out. By doing this, borrowers can secure a rate without paying expensive arrangement fees.

What if I am buying a home?

Those with home purchases agreed should also aim to secure rates as soon as possible, so they know exactly what their monthly payments will be.

Home buyers should beware overstretching themselves and be prepared for the possibility that house prices may fall from their current high levels, due to  higher mortgage rates limiting people’s borrowing ability.

How to compare mortgage costs

The best way to compare mortgage costs and find the right deal for you is to speak to a good broker.

You can use our best mortgage rates calculator to show deals matching your home value, mortgage size, term and fixed rate needs.

Be aware that rates can change quickly, however, and so the advice is that if you need a mortgage to compare rates and then speak to a broker as soon as possible, so they can help you find the right mortgage for you.

> Check the best fixed rate mortgages you could apply for