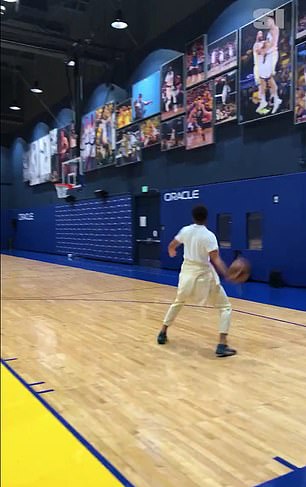 NBA star Steph Curry sinks five full-court shots in viral video, but ‘it is FAKE’… although some fans claim it could be real because the Golden State Warriors champ ‘is that damn good’

Golden State Warriors star Steph Curry left fans in awe after a video of the two-time NBA MVP sinking multiple full-court shots went viral but it was later revealed the clip was fake.

The four-time NBA champion launched the balls down the full length of the court before triumphantly exiting after the fifth and last one slipped through the net.

The video, which was posted to social media by Sport Illustrated, had fans split with some left in awe, while others were more dubious.

The doubtful had their suspicions confirmed after Associated Press reported the Warriors had confirmed it was not real – despite the franchise earlier sharing it to their own account with the caption, ‘Steph gonna STEPH.’

While the majority of responses to the clip slammed it as fake others claimed if anyone could make the feat possible it would be Curry.

On social media user posted: ‘But what if it is real that just shows you how good Steph is. It could be real. He’s that damn good!’

‘It has to be fake but if there was one man who could do it, It’d be that fella,’ another added.

While one claimed the star was ‘so unreal’ it made it difficult to make the decision between real and fake.

Before it was confirmed to be fake, some fans were adamant the viral video was somehow real.

One praised Curry’s ability as they said: ‘Here is another Robot in the game of sport. Men like Dinho or Steph curry just don’t miss.’

Another added: ‘This reminds me of those old insane Nike commercials that looked real… except this is real. Somehow.’

Before it was confirmed to be fake, some fans were adamant the viral video was somehow real

‘If it was anyone else I might have called fake but it’s Steph we are talking about here,’ another claimed. ‘Ray Allen eat your heart out.’

The video was filmed by the same director who shot NFL star Tom Brady hitting a hole-in-one earlier this year.

The Buccaneers quarterback and seven-time NFL champion published a video of a stunning golf shot on social media in May which immediately saw sceptics among his 2.7million followers labelling the video as ‘fake’ and ‘clickbait’.

Brady, who has been accused by his fans in the past of staging videos, is stood on the fairway in this scene, before rifling a shot towards the pin before getting it to go straight in.

‘That’s looking good,’ Brady says, as he watches his shot. ‘That’s going in. That’s in!’

The Tampa QB immediately jumps around in a disbelieving celebration but fans of his found it difficult to believe, especially having watched the cinematography of the drone footage which made it appear too slick.