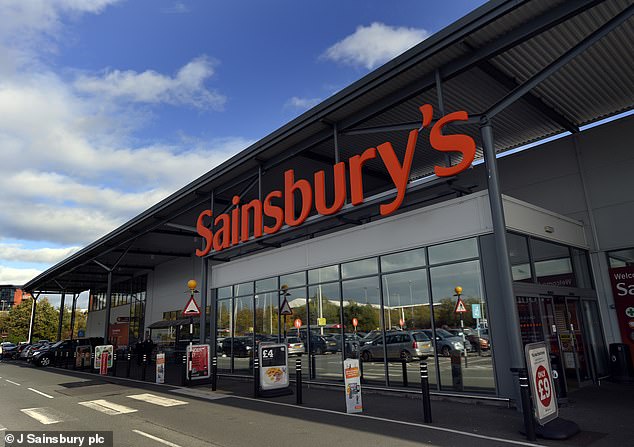 Sainsbury’s will invest an additional £50million towards keeping its products affordable for customers amid the cost-of-living crisis.

More than 30 per cent of the planned extra spending will go on keeping the price of Sainsbury’s Christmas food offering down even as higher inflation afflicts the UK retail sector.

Families on a tight budget will be able to purchase a traditional Christmas roast dinner from the supermarket chain costing under £4 per person, less than they would have paid last year, according to Sainsbury’s.

Affordability: Families on a tight budget will be able to purchase a traditional Christmas roast dinner from the supermarket chain for under £4 per person, according to Sainsbury’s

Other festive treats set to benefit from the investment include Mini-Crab Thermidor Crumpets and Christmas Tree Vol-au-Vents from the firm’s Taste the Difference collection.

The remaining funding will be focused on regularly-bought items as part of other existing schemes, such as Aldi Price Match, Price Lock, and My Nectar Prices.

Sainsbury’s latest investment means it will have spent in excess of £550million by March 2023 on its ‘value plan,’ 10 per cent above the initial target declared in May.

Simon Roberts, the chief executive of Sainsbury’s, said: ‘We really understand that millions of households are having to make really tough decisions this Christmas, and our job is to do everything we can to help with the rising costs of living.

‘We are accelerating our commitment to being the best value, investing a further £50million in lowering prices and doing everything we can to fight inflation and help our customers enjoy celebrating this year.’

The UK’s inflation rate hit a record 11.1 per cent in October, the highest level in 41 years, driven primarily by soaring energy bills and much higher food prices.

Value for money: Sainsbury’s latest investment means it will have spent over £550million by March 2023 on keeping prices affordable, 10 per cent above the initial target declared in May

Facing steepening competition from discounters like Lidl, British supermarkets have also responded to the pressure by freezing the prices of some everyday products, despite the inevitable impact on profit margins.

Tesco has committed not to raise the price of over 1,000 goods, including oven chips, toothpaste and Robinsons orange squash, until 2023.

Meanwhile, Morrisons pledged to reduce the price of 52 Christmas items, such as cranberry sauce, mince pies and stuffing, at a cost of £3million in anticipation of demand spiking.

Supermarkets are also boosting support for employees by hiking salaries or offering discounts on certain products.

Personnel will also be allowed to eat some essential foods for free during their shift and see their Sainsbury’s discount bumped up to 15 per cent for five days around payday, though this latter perk is not available to temporary staff.

J Sainsbury shares were up 0.3 per cent to 224.6p just before trading closed on Monday, although their value has declined by around a fifth in the past 12 months.