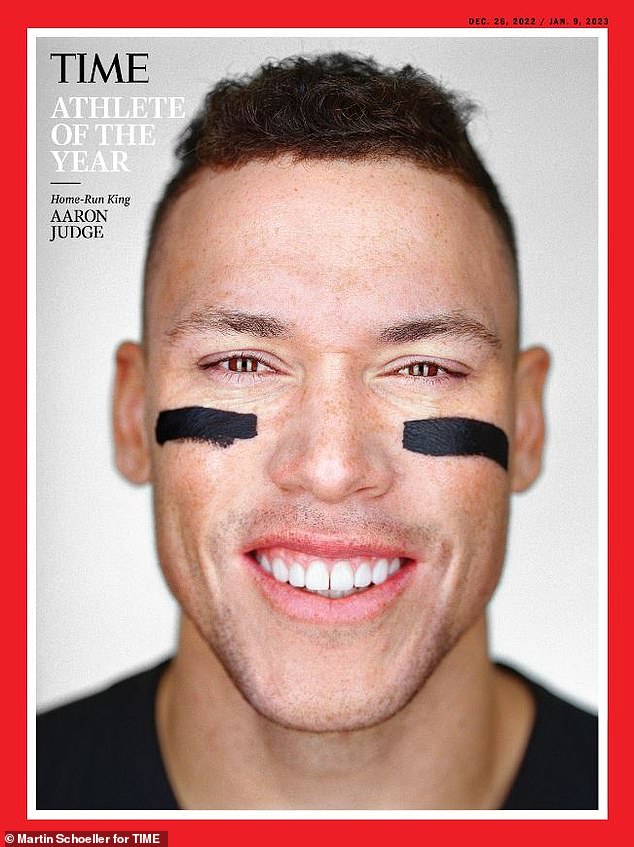 Aaron Judge has revealed he wasn’t happy with the New York Yankees for disclosing the details of the offer he turned down.

The star slugger, who linked up with Tom Brady this week, is currently weighing up his next move after leaving the Bronx following a record-breaking season in which he hit 62 homers.

The Yankees and the San Francisco Giants are considered to be the frontrunners for his signature but his future remains up in the air.

The American League MVP is a free agent after turning down a seven-year, $213m Bronx deal

The American League MVP was named TIME Athlete of the Year Tuesday and he opened up on the situation with the Yankees when he rejected a seven-year, $213m deal.

‘We kind of said, “Hey, let’s keep this between us,”‘ Judge told TIME magazine.

‘I was a little upset that the numbers came out. I understand it’s a negotiation tactic. Put pressure on me. Turn the fans against me, turn the media on me. That part of it I didn’t like.’

Reports have emerged that the Yankees have put a $300m offer on the table to try to re-sign Judge, although GM Brian Cashman admitted the team face ‘danger’ of losing him.

‘When I was young and getting into the game, all guys ever talked about was, “Hey, wait until you become a free agent,” Judge continued to the magazine.

‘You’re getting a chance to make your own decision, start a legacy somewhere, start something new somewhere. I’m looking forward to the whole process, man. It’s going to be special.’

The Giants have been admirers and even Judge has been fond of the team since 2010.

‘I said, in 10 years, I’ll be married to Sam and playing for the San Francisco Giants.’ Judge said. ‘I was like, that’d better not get out.’