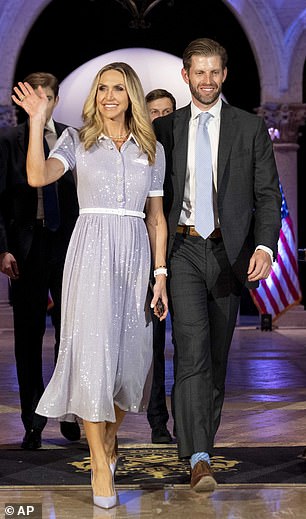 Eric Trump has hit back at claims the Trumps don’t like Don Jr.’s fiancée Kimberly Guilfoyle – after Ivanka skipped the couple’s holiday party weeks after cropping her soon-to-be sister-in-law from a photo on Instagram.

This week, Don Jr., 44, and his fiancée Kimberly, 53, hosted a fundraiser holiday party for the charity Toys For Tots attended by more than 300 people at their $9.7 million Palm Beach mansion, DJ’d by Kid Rock.

Eric attended with his wife Lara, and Donald Trump made an appearance for 30 minutes before leaving for another event. But Ivanka and her husband Jared, while invited, did not attend  – because it was Shabbos, the Jewish Sabbath.

A source told Page Six: ‘The vibe is that the family doesn’t like Kim. She is trying too hard to be in the family.’

But Don Jr.’s brother Eric hit back at the suggestion, telling the publication: ‘I completely disagree with the narrative and happen to think the world of Kimberly.

‘I am best friends with Don and had an absolute blast at the party.’

No rift: Eric Trump (pictured left with his wife Lara) hit back at rumors the Trump family doesn’t like his future sister-in-law Kimberly Guilfoyle (right, with her fiancé Don Jr.) Eric said: ‘I completely disagree with the narrative and happen to think the world of Kimberly’

‘They have a good relationship. It’s just the rumor mill,’ a source said.

Claims Guilfoyle isn’t liked, but the Trump family began circulating when Ivanka cropped her out of an Instagram photo taken at youngest sibling Tiffany’s wedding.

In a photo posted to Instagram, Ivanka cropped Kimberly from the line-up of Trump women posing with the bride, prompting a flurry of rumors about internal politics in the family.

The original photo – which she posted to her Stories later in acknowledgment of her social media faux pas – showed Ivanka, her step-mother Melania, Tiffany, her mother Marla Maples and their sister-in-law Lara, all in pastel hues, with Kimberly at the end dressed in black.

Don Jr. and Guilfoyle held a party at their $9.7 million Palm Beach mansion this week, with rapper Kid Rock as DJ and more than 300 guests. Donald Trump attended but only stayed for half an hour, with Eric Trump and his wife, Lara, also making an appearance. Ivanka and her husband Jared, however, were absent

Ivanka did not delete the original post or story, which she followed up with some footage of the former President giving her golf lessons, simply posting the original photo on her Instagram stories four hours later.

A former prosecuting attorney and Fox News host, 53-year-old Guilfoyle became an adviser to the 45th President of the United States during his term in office.

Trump Jr., who serves as an executive vice president of the Trump Organization alongside his brother Eric, began dating Guilfoyle in 2018 and the pair got engaged in 2020.

Guilfoyle and Don Jr. live in Florida only 80 miles from Ivanka Trump and her husband Jared Kushner.

Ivanka and Kushner are building a home in Indian Creek near Miami, while Trump Jr and Guilfoyle bought a $9.7million house in Jupiter, north of West Palm Beach.

ORIGINAL: The former First Daughter shared a cropped photo on Twitter, with the black-wearing Guilfoyle cropped out

REPOST: Ivanka rectified her ‘terrible mistake’ of cropping Kimberly Guilfoyle out of her gallery of pictures on Instagram by posting a story of the full line-up four hours later with a series of heart emojis

Guilfoyle and Don Jr. are highly active on the campaign scene, believed to be encouraging Trump to go for a second term.

Ivanka and her husband, meanwhile, are reportedly taking a back seat from Washington DC, and have no intention of returning to the White House if Trump runs again and wins.

Guilfoyle was married to California Democratic Governor Gavin Newsom and filed for divorce in January 2005.

She claimed the strain of a bi-coastal relationship took a toll on their marriage after she moved to New York City in 2004 to work in broadcast television, according to the San Francisco Chronicle.

Newsom told People in a September 2022 interview that he and his ex no longer speak.

Kimberly Guilfoyle and Gavin Newsom, who was Mayor of San Francisco before he became Governor of California. Both were all smiles at the TV and Radio Correspondents Dinner on March 24, 2004 in Washington, DC. In January 2005, the couple divorced

According to The Washington Post, Guilfoyle and Trump Jr. became friends as her son, Ronan, went to the same private school in Manhattan as his oldest daughter, Kai.

The pair started dating around March 2018 around the same time his ex-wife, Vanessa, filed for divorce.

The former Fox News host was a senior Trump campaign advisor and fundraiser and she and Don Jr, became a GOP power couple.

In January 2022, they made their engagement public.

During the night’s festivities, Trump Jr. goes to Instagram to share footage of Kid Rock entertaining partygoers. The video was then spread across YouTube and social media.

PatriotTakes, a platform that describes itself as ‘dedicated researchers monitoring and exposing right-wing extremism and other threats to democracy,’ tweeted out a post on Saturday.

‘Don Jr. posted a video of Kid Rock ‘taking over the DJ booth’ at his Christmas party and then continued streaming as Kid Rock struggled to figure out the DJ equipment.

It is not clear how long Trump Jr. and Kid Rock have been friends, but the Detroit rapper held a campaign rally in his home state of Michigan when Trump was running for President in 2020.

Trump Jr. was at the ‘Make American Great Again’ rally  alongside his girlfriend Guilfoyle.