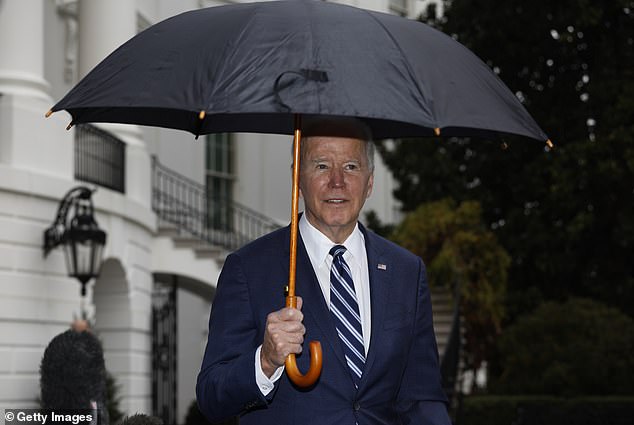 A day ahead of the Georgia Senate runoff election, President Biden re-emphasized his promise to reduce the ‘enormous debt’ for students who graduated with student loans – and insisted it will overcome ongoing legal challenges.

‘There’s a whole lot of people affected and we’re confident on the law,’ Biden said during an interview on the Ryan Cameron Uncensored radio show, as first reported by National Review on Monday.

‘We’re confident we’re right on the law and we think the court will probably come out the right position.’

The average student loan balance is currently over $30,000.

The non-partisan Congressional Budget Office in September calculated the debt forgiveness would eliminate about $430 billion of the outstanding $1.6 trillion in outstanding student debt and about 40 million people would benefit.

‘What it (forgiveness) allows people to do is get a new start in life and it also helps the economy,’ said the Democratic president about the pros of federal loan forgiveness.

President Joe Biden uses an umbrella to keep out of the rain as he departs the White House on Tuesday in Washington, D.C.  The issue of canceling student loan debt by executive order will be heard by the Supreme Court in early 2023.

The Supreme Court, whose justices are pictured, has agreed to hear the Biden administration’s plan to forgive student loan forgiveness by executive order in February 2023.

Voters under the age of 30 chose Democrats in the midterms by a 63-35 margin, their largest percentage demographically and their largest victory, NBC News exit polls reported.

About half of voters approved of Biden’s student loan forgiveness plan, roughly the same as those who disapproved.

In October, the U.S. Court of Appeals for the Eighth Circuit granted a temporary hold in response to a challenge to the order by a coalition of six Republican-led states.

Texas District Court Judge Mark Pittman, an appointee of former President Trump based in Fort Worth, also blocked the plan and said the program usurped Congress’ power to make laws.

The House Education and Labor Committee Republicans were equally as dismissive.

‘This policy costs taxpayers BILLIONS every month it continues. A return to repayment is long overdue,’ they wrote on Twitter.

‘I find it interesting the very people who are really going after us — the Republicans — and bringing these suits, governors and others but particularly members of the House, they qualify for these PPP loans,’ Biden said.

Earlier this year, the official; White House twitter account made it a point to systematically identify Republicans who had forgiven PPP loans including MTG and Buchanan.

The White House tweeted that Republican Rep. Vern Buchanan had over $2.3 million in PPP loans forgiven

‘(Marjorie Taylor) Greene and her family… they’re complaining about debt forgiveness for hard-working, poor and middle class folks who had to borrow money to get to college to begin with, said Biden.

The main difference between the student loan plan and the PPP program is that the debt relief authorization is by executive order. Meanwhile the pandemic relief funds were approved by both chambers of Congress and signed into law.

In a 26-page opinion, Pittman called Biden’s plan an ‘unconstitutional exercise of Congress’s legislative power’ and noted the program failed to go through standard regulatory processes.