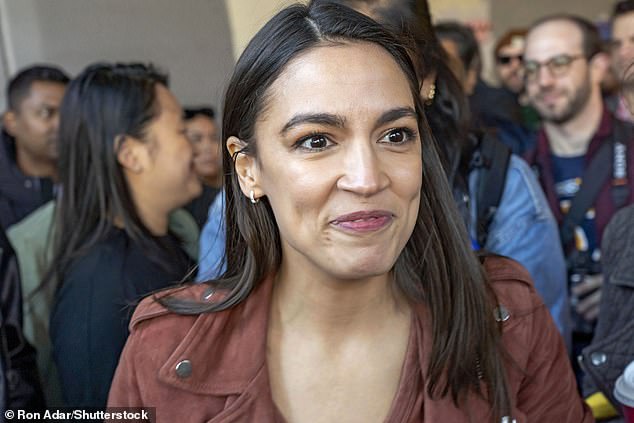 On Wednesday, the committee released a brief statement saying a probe into the high-profile progressive was being extended, but didn’t delve into details about what it was regarding.

It comes more than a year after a number of conservative groups asked the committee to look into the congresswoman being comped $35,000 Met Gala tickets and sporting a designer-made ‘Tax the Rich’ dress.

‘The Acting Chairwoman and Acting Ranking Member of the Committee on Ethics have jointly decided to extend the matter regarding Representative Alexandria Ocasio-Cortez, which was transmitted to the Committee by the Office of Congressional Ethics on June 23, 2022,’ the statement said.

‘The Committee notes that the mere fact of a referral or an extension, and the mandatory disclosure of such an extension and the name of the subject of the matter, does not itself indicate that any violation has occurred, or reflect any judgment on behalf of the Committee, ‘ it continued.

‘The Committee will announce its course of action in this matter following its organizational meeting and adoption of Committee Rules in the 118th Congress,’ it said.

The House Ethics Committee is investigating New York Democratic Rep. Alexandria Ocasio-Cortez. On Wednesday, the committee released a brief statement saying a probe into the high-profile progressive was being extended

It comes more than a year after a number of conservative groups asked the committee to look into the congresswoman being comped $35,000 Met Gala tickets and sporting a designer-made ‘Tax the Rich’ dress

Several conservative groups filed complaints with the House Ethics Committee over Rep. Alexandria Ocasio-Cortez’s attendance at the Met Gala in September 2021, where she sported a custom-made dress

The 118th Congress, in which Republicans will have control of the House of Representatives, will kick off in early January.

A spokesperson for Ocasio-Cortez told Forbes, which first reported on the investigation, said that she was confident the case would be dismissed.

The conservative watchdog group, the Foundation for Accountability and Civic Trust, had called on the House Ethics Committee to probe AOC in September 2021 following her appearance at the Met Gala.

Kendra Arnold, the executive director of FACT, said that AOC receiving a $35,000 ticket and ‘borrowing’ her designer ‘Tax the Rich’ dress violated the House’s gift rule.

‘This is a case where the Member’s own words should trigger an investigation–not only did she state that she did not pay for an item, she also implied that she was given the ticket because of her “responsibilities in overseeing” the gift-giver,’ Arnold said.

Ocasio-Cortez was seated at the table of Vogue editor-in-chief Anna Wintour, who organizes the annual affair to raise money for the Metropolitan Museum of Art’s Costume Institute.

‘This entire situation is exactly what the House’s gift rule is designed to prevent, and we request an immediate investigation into this matter by the Office of Congressional Ethics,’ Arnold said.

FACT shared Forbes’ story to its Twitter account on the House Ethics Committee investigation being extended on Wednesday.

A second conservative group, the National Legal and Policy Center, also filed a complaint about her attendance at the Met Gala to the House Ethics Committee.

‘Representative Ocasio-Cortez may have violated the House Gift Rule by accepting free admission for herself and boyfriend to the Met Gala event and receiving related gifts before, during, or after the event, including the use of custom-designed dress, limousine service, the use of the Carlyle Hotel, professional hair and makeup services, and any other related services or goods,’ the NLPC complaint stated.

The House Ethics Committee did not say whether these complaints were why the New York Democrat was being investigated.