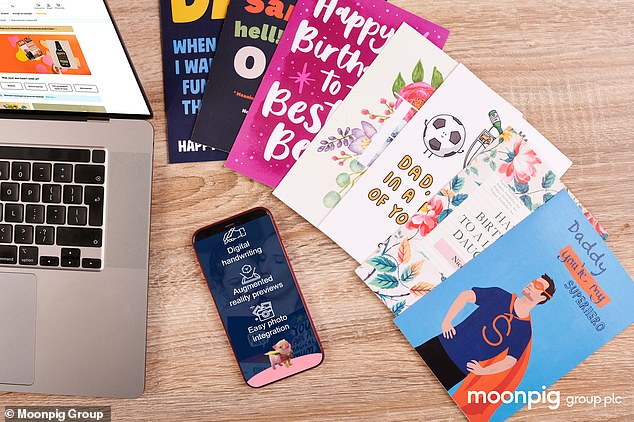 The greeting cards retailer now expects to post around £320million in revenue for the year ending April, about £30million lower than its earlier forecast, although its adjusted underlying earnings expectations remain the same.

It told investors on Wednesday that industrial action by Royal Mail workers, who are seeking pay rises in line with inflation, during September and October negatively impacted last-minute, card-only orders in the UK.

Forecast: The greeting cards retailer now expects to post around £320million in revenue for the year ending April, about £30million lower than its earlier prediction

Further strikes are planned for this Friday and Sunday, Wednesday and Thursday next week, and 23 December and Christmas Eve, potentially causing headaches for businesses and households.

Trading was also damaged by a slowdown in the retail sector as skyrocketing energy bills heavily squeezed consumer spending and forced companies to hike prices.

Moonpig Group shares tumbled by 16 per cent to 127p this morning following the trading update’s release, making them the biggest faller on the FTSE 350 Index.

Their value has slumped by approximately two-thirds since the firm, founded by former Dragons Den star Nick Jenkins, listed on the London Stock Exchange in February last year.

Short sellers have built up a record volume of the group’s stock, anticipating a drop in demand as the pandemic-era boom in online card buying subsides and customers tighten their purse strings.

For the six months to 30 October, orders within the retailer’s Moonpig and Greetz brands fell by 2.6million year-on-year to 16.9 million, primarily driven by the absence of lockdown restrictions.

Its total sales only escaped decline because of higher card prices, a more targeted use of promotional discounting and the contribution from gift experience brands Red Letter Days and Buyagift, which were acquired for £124million in July.

The company has diversified its product offering away from cards in recent years, selling more gifts ranging from afternoon tea to helicopter lessons, flowers and spa breaks, in order to enhance sales.

It said there was a ‘significant opportunity’ to elevate the share of card-attached gifting orders, given that only around 20 per cent of current Moonpig and Greetz purchases contain a gift, as well as the share of greeting cards sold online.

But heightened economic pressures are already leading the group’s customers to trade down to cheaper goods, hitting profitability, while the rate of new customer growth has decreased from the previous year.

Sophie Lund-Yates, lead equity analyst at Hargreaves Lansdown, said: ‘The sad truth is that while the cost-of-living crisis cruises on, people are simply not inclined to throw chocolates and flowers into their virtual baskets.

‘Sadly, this is also a trend likely to persist at least into the first quarter of next year and massively limits margin potential. Ultimately, the market is nervous about Moonpig. There is a question mark over where meaningful growth comes from.