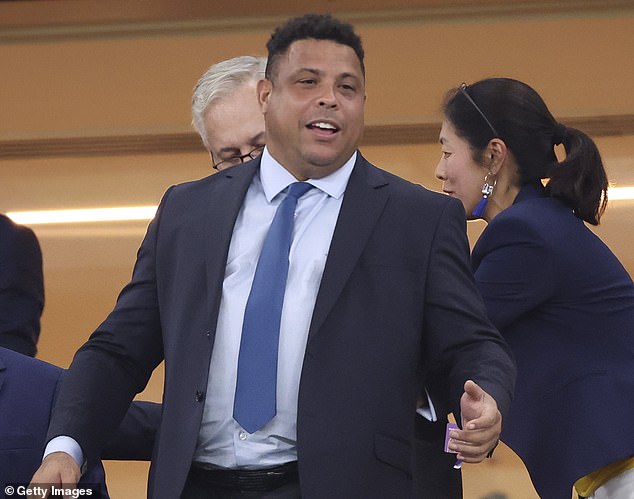 By Arthur Parashar For Mailonline

Football legend Kaka has bizarrely claimed that Brazilians lack respect for two-time World Cup winner Ronaldo and just see him as a ‘fat man walking down the street’.

In another strange revelation, the AC Milan and Real Madrid legend also said that many Brazilians do not actually support the national team.

Ronaldo, who is regarded as one of the greatest players in football history, helped fire Brazil to World Cup success in 1994 and 2002 and enjoyed successful spells at Barcelona, Inter Milan and Real Madrid.

‘It happens sometimes. If you see Ronaldo walking around here, you’ll be like: “Wow, he has something different here.”

‘In Brazil, he’s just a fat man walking down the street.’

When host Richard Keys asked if Ronaldo has the same appreciation from Brazilians as he does from everyone else, Kaka said: ‘Of course, many Brazilians love Ronaldo, I love Ronaldo, but the way he is respected in Brazil and abroad is different, I see more respect for him outside the country than there.’

Fellow pundits Gary Neville and John Terry were surprised by Kaka’s statements in the studio.

Kaka’s point related to the fans’ treatment of Neymar, who despite being the star of the Brazilian team, is seen quite negatively by Brazilians.

The former midfielder registered 92 caps for his country scoring 29 times across 14 years in a Brazil shirt.

Kaka made his debut aged 19 in a friendly against Bolivia in January, 2002. He would go on to join Ronaldo at the World Cup that year in Korea and Japan but had little game time, having not yet established himself on the global stage.

Brazil went on to win the World Cup that year, with Ronaldo playing a pivotal role in their success, coming home with the Golden Boot after scoring eight times.

The Brazilian legend, like Kaka, has also been out in Qatar watching the national side progress through the tournament. The pair were pictured together with Cafu and Roberto Carlos at the Brazil vs Switzerland game.

Brazil will face Croatia in the quarter-finals later today with both Ronaldo and Kaka likely to be watching.