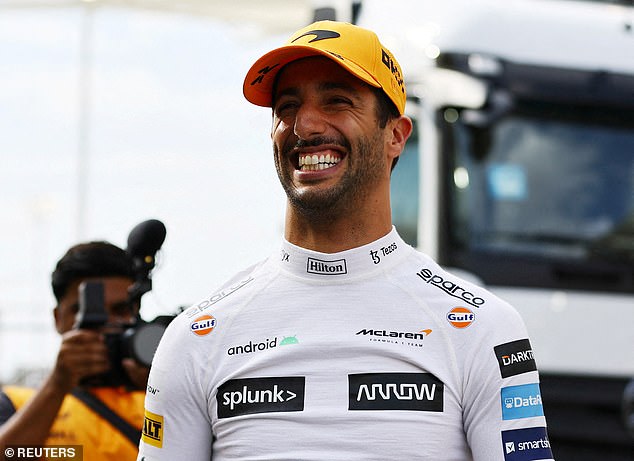 Daniel Ricciardo could be in line for a sensational short-term switch to V8 Supercars next season after Triple Eight Race Engineering and Garth Tander surprisingly parted ways on Friday.

The Red Bull-owned team said that Tander, a five-time Bathurst 1000 winner, had opted not renew his contract at the end of the season, just two months after triumphing at Mount Panorama alongside Shane Van Gisbergen.

Team principal Jamie Whincup said the would speak with ‘drivers both domestic and abroad to find the best fit to co-pilot’ the number 97 car together with Van Gisbergen.

He added the search for a replacement driver to share the seat at the Sandown 500 and Bathurst 1000 next year was already underway.

According to News Corp, Tander’s unexpected departure could open the door for Ricciardo.

The Australian doesn’t have a seat on the grid for the 2023 Formula 1 campaign after splitting with McLaren at the end of a difficult season.

The eight-time Grand Prix winner signed a deal with Red Bull to be their reserve driver next year and has vowed to secure a seat for 2024.

The 33-year-old came through the junior ranks at Red Bull and raced for two years for the drink giant-owned Scuderia Toro Rosso – which has since rebranded to Alpha Tauri – before being promoted to Red Bull’s main team.

And his return to the Milton Keynes-based team could facilitate a switch to V8, as the energy drink giant’s motorsport arms includes Triple Eight Race Engineering, which is branded as Red Bull Ampol Racing Supercars.

News Corp reported that Supercars have already sounded out Ricciardo about possible appearances at selected events in next year’s championship.

Fernando Alonso followed a similar path when he raced for McLaren in the Indianapolis 500 in 2017 and 2019, while under contract for the team’s Formula One team.

In May, Supercars chief executive Shane Howard said the sport would be prepared to roll out of the red carpet for the former McLaren driver.

‘If the opportunity presented itself to have Daniel on the grid as a wildcard or otherwise, we would absolutely want it to happen,’ Howard told the Herald Sun.

‘He is one of the best drivers and most recognised athletes in the world, it would be fantastic to have him race a Supercar at some point.

‘We haven’t spoken to Daniel or his management and it would be in the hands of teams to align any opportunities that may present themselves in the future, but for sure it is something we would support.’