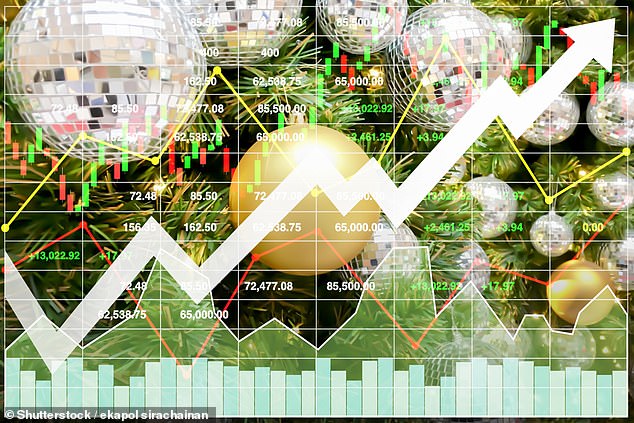 INVESTING EXPLAINED: What you need to know about a Santa Rally – an increase in value of stock markets on the last five trading days of the old year and the first two sessions of the new

In this series, we bust the jargon and explain a popular investing term or theme. Here it’s Santa Rally.

A get together for Father Christmases?

No such event takes place, I’m afraid, but a Santa Rally can also be an occasion full of good cheer – which investors could celebrate by drinking toasts to the season and giving the occasional shout of Ho, Ho, Ho.

It’s the name given to an increase in the value of stock markets on the last five trading days of the old year and the first two sessions of the new.

Festive cheer: A Santa rally is the name given to an increase in the value of stock markets on the last five trading days of the old year and the first two sessions of the new

Who thought this up?

The late Yale Hirsch, an American investment guru, first used the phrase in 1972, having chronicled the performance of the S&P 500 index between 1950 and 1971.

This showed that shares rose consistently over the period leading up to Christmas and in the early days of January.

Hirsch regarded the rally as a bullish signal to buy shares in the year ahead. The Santa Rally has been a phenomenon more closely watched in the US than the UK, but this is changing.

Has this pattern been maintained?

A study from the Bestinvest platform in late 2021 revealed that, over a 40-year period beginning in 1982, markets rose in December on about three-quarters of occasions. This was a far greater occurrence than in any other month.

The volume of trading can be very low during the festive season, meaning that a bounce in the prices of a relatively low number of stocks can hugely flatter the overall picture. Some would contend that the mood of merriment and goodwill can provoke optimism about the outlook for the year ahead.

I’ve heard something about window dressing

Yes, at Fortnum & Mason. Less charmingly, fund managers who wish to present the best picture of their funds in a final quarter report may sell weaker stocks and snap up others that are rapidly recovering. If widespread, this could give a boost to a Santa Rally that’s already under way.

The S&P 500 rebounded, which seemed to presage a stellar out-turn for the year ahead. However, the index has tumbled by 17 per cent since January due to surging inflation and interest rates and geopolitical dislocation.

A few weeks ago the US markets began to revive, driven by the view that inflation was retreating, and interest rate rises could be more limited than forecast. But sentiment has rapidly become more doom laden.

The Footsie stepped into Christmas 2021 with a Santa Rally. But there have been some sharp declines due to higher rates and the war in Ukraine. However, the index is roughly at its January level.

Will Santa Claus come to the city this December?

The likelihood of a Yuletide bounce this year seem to be based on how traders decide to perceive forthcoming economic data. One investment manager remarked: ‘If there is less bad news than expected, then traders could decide to get into the festive spirit and drive a rally.’ Don’t pull the crackers or open the champagne yet.