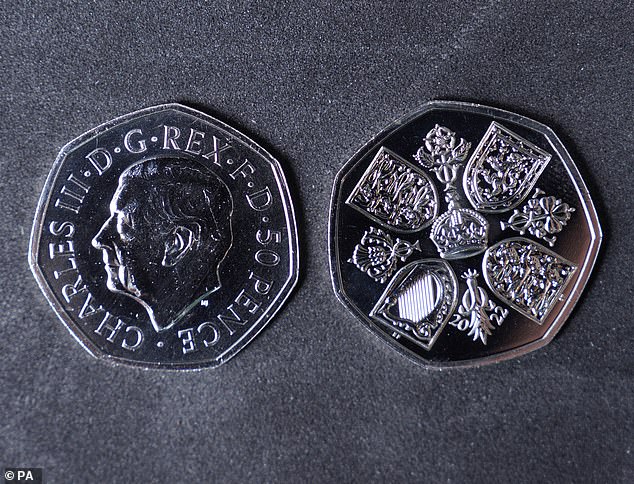 Eyes to the left! New Charles coin hits circulation: But coin not expected to go up in value as 4.9m will flood market

His Majesty King Charles III can now be found in your pocket – making his first appearance on the ‘head’ side of a 50p piece that began to be circulated last week.

This new coin is expected to increase interest in numismatics – the collecting of currency. But despite its historic significance, this King Charles coin is not expected to go up in value as 4.9million will flood the market. Only anomalies will result in the coin being worth more than 50p.

Following the tradition of alternating the profile of successive monarchs, King Charles faces left. His mother Queen Elizabeth II faced right. So if your monarch coin is looking in the wrong direction, it could be worth a small fortune.

Other 50p coins have sold for as much as £1,000 due to mistakes and collection fever surrounding limited editions. A batch of 600 coins featuring a swimmer whose face was accidentally obscured in a set of 2012 Olympics 50p pieces now sell for £800 each.

A limited edition Peter Rabbit 50p coin minted in 2016 to commemorate the 150th anniversary of the birth of Beatrix Potter has changed hands for up to £1,000.

Other 50p investments include a 2019 Paddington Bear limited edition selling for £300 and a 2009 Kew Gardens piece issued to commemorate the Royal Botanic Gardens’ 250th anniversary that can be worth as much as £200.