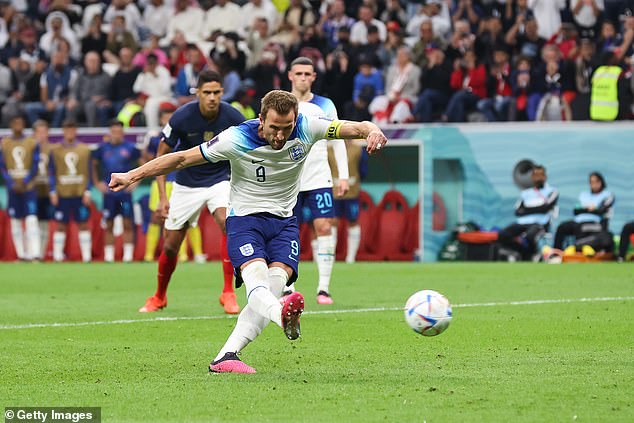 History maker Harry! Kane becomes England’s joint-record goalscorer with Wayne Rooney after netting his 53rd goal for the Three Lions from the penalty spot… but it’s a night of heartache after their World Cup defeat by France

By Adrian Bishop For Mailonline

After England went behind early, the Spurs star netted from the penalty spot to draw Gareth Southgate’s team level against his teammate at Tottenham, Hugo Lloris.

The strike means the 29-year-old is level with Wayne Rooney at the top of the all-time goalscoring charts for England.

‘Tries to win the battle of the minds and fails. It’s a great penalty. Lovely strike on the ball. England have started this second-half so much better than the first half and they’re back in it. Now we go again.’

England went behind early at the Al Bayt Stadium, with Real Madrid midfielder Aurelien Tchouameni driving his strike beyond Jordan Pickford after 17 minutes.

A contentious first half followed, with referee Wilton Sampaio coming under fire from England fans online after denying England a penalty after Kane was brought down from a clumsy challenge by Dayot Upamecano.

Gareth Southgate’s side looked stronger after the interval and were given their opportunity to level from twelve yards when Bukayo Saka was brought down by Tchouameni.

After Olivier Giroud put Les Blues back in the lead, Kane had a golden opportunity to surpass Rooney as England’s record goalscorer after Southgate’s side were awarded a second penalty but he failed to convert as England fell to defeat.