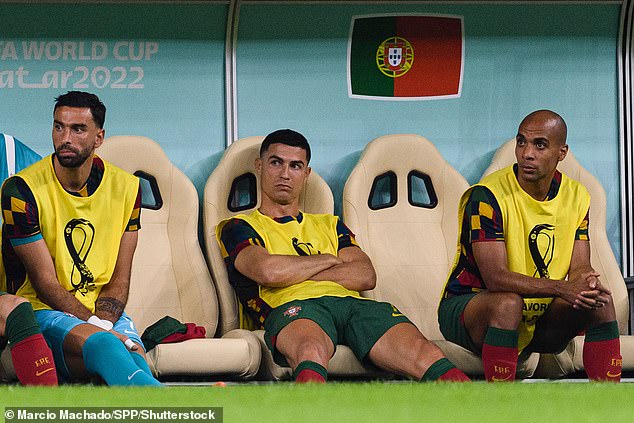 Socceroos legend Robbie Slater believes how Cristiano Ronaldo behaves on the bench could make or break Portugal’s World Cup chances ahead of their quarter-final against tournament surprise package Morocco.

Slater, who played 44 internationals for Australia, said the maligned Manchester United striker needed to accept his role as a role-player for his national side in the twilight years in international competition.

The 37-year-old former Real Madrid star has attracted widespread criticism for the way he handled being relegated to the bench for Seleção das Quinas against Switzerland in the round of 16.

Ronaldo looks on from the bench during the match between Portugal and Switzerland in the round of 16 Lusail National Stadium in Lusail, Qatar.

With the veteran superstar benched, Portugal belted Switzerland to the tune of 6-1 and it is extremely likely coach Fernando Santos will adopt the same strategy against Morocco.

Ronaldo clapped to the Portugal supporters and shook the hands of their opposition before storming off the field and straight down the tunnel before his teammates.

By the time he was substituted into the game in the 73rd minute, the result was already beyond doubt.

Goncalo Ramos, 21, had completed his first international hattrick while Pepe and Raphael Guerreiro were on the scoresheet in Portugal’s best performance so far in the World Cup.

Slater said that when Ronald was inevitably benched for the quarter final against Morocco, his attitude would still play a key role in the final result.

‘I think it is obvious, after the way Goncalo Ramos starred with a hattrick in the demolition of Switzerland, Portugal’s coach Fernando Santos is not going to start Ronaldo and is backing his team,’ he wrote for The Australian.

‘The fact Ronaldo got dropped just shows he is human. At 37, he is no spring chicken. I know with Messi he has been one of the greatest footballers of his generation in the world, but nothing goes forever. But he still has a big role to play for Portugal.

‘Ronaldo’s behaviour has the potential to upset team balance and harmony, so how he carries himself will be just as important as how he performs when he gets his chance to play.

‘It is a great first XI. Bruno Fernandes, Bernardo Silva, William Carvalho, Joao Felix, Raphael Guerreiro and Ramos, this team is stacked with quality and their performance and preparation looks bang on.’

Slater’s warning comes after Santos admitted he spoke to Ronaldo before the Switzerland match to tell him he would start from the bench, news the Manchester United star did not take well.

‘That conversation needed to happen. I don’t do that with all the players. But he’s the captain.

‘What he represents for Portuguese football, the people and its national team, I naturally needed to talk to him. I spoke to him after lunch on the match day, ahead of the Switzerland game. I did not have any conversation before. I explained to him why he would not be playing.

‘I invited him to my office and told him, ‘It’s better for our strategy if you didn’t play’. I said I’d save him for the second half. Cristiano was not very happy about it. He has always been one of the starting players.’

While Ronaldo’s body language and mood did not look great on the pitch, he adopted a team-first attitude on social media.

‘Amazing day for Portugal, with a historic result in the biggest contest in world soccer. Luxury exhibition by a team full of talent and youth. Congratulations to our national team. The dream is alive! To the very end! Come on, Portugal!’ he posted on Instagram.