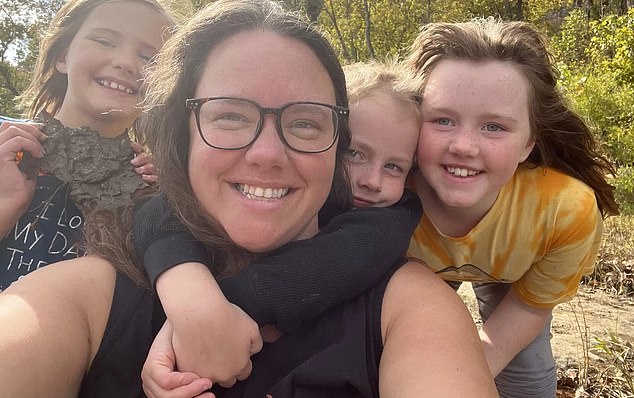 Virginia mom says social workers threatened to put her three young children in FOSTER CARE if she lets them play outside alone after son, 4, kicked soccer ball near neighbor’s cat

By Neirin Gray Desai For Dailymail.Com

A mother of three in Virginia is no longer able to let her children play outside for fear Child Protective Services will take them away.

Emily Fields claims she’s being accused of neglecting her children after her four-year-old son kicked a soccer ball towards a neighbor’s cat.

Fields, who lives in Pearisburg, Virginia, says she became a target of social workers who urged her to sign a form disallowing her kids – a boy now 6 and two daughters aged 8 and 9 – from playing outside without constant supervision.

According to Fields one of the workers lives in her neighborhood and harbors animosity towards her family.

Fields, who lives in Pearisburg, Virginia, says she became the target of social workers who urged her to sign a form disallowing her kids – a boy now 6 and two daughters aged 8 and 9 – from playing outside without constant supervision. She is pictured with her children

In May 2021 her son, four at the time, kicked a football across the road in the direction of a neighbor’s cat, but did not hit it, she says.

When Fields took the boy across the road to apologize, the neighbors were incensed and told her that they would call the CPS everyday until her children were taken from her.

‘They began to scream and yell,’ said Fields. ‘They said that everyone in the neighborhood thought I was a horrible mother, and that my children abused animals.’

She also said that her children were being watched by her sister at the time.

The next day two caseworkers were dispatched to her house. Feeling overwhelmed, she signed what the department called a ‘safety plan’, requiring the family ‘to supervise the children at all times when playing outside.’

‘If safety plan is violated, a protective order will be filed,’ it read.

In May 2021 her son, four at the time, kicked a football across the road in the direction of a neighbor’s cat, but did not hit it, she says

Fields says she was also told the children had been seen by a caseworker knocking on doors in the neighborhood and asking to come into people’s houses.

She says the children were actually going to houses on just their street to sell Easter eggs as part of a childish scheme to make some money.

‘At no point were they out of my sight,’ she said. ‘And at no point did they go inside.’

Do YOU think this is fair?

One of the doors they knocked on was that of the caseworker, Fields says.

It followed another incident in 2018 when the family returned from a walk to find two CPS workers in a car on their drive.

Fields has always wanted her kids to play outside. They would often be out there in the backyard of her house.

But CPS told her that her kids had to be supervised at all times until they turned 13.

A few weeks later she called to check if there were formal charges against her and was told her case was never officially opened.

Such cases are a focus of the Let Grow, which has done work in a number of states to pass laws that better define the meaning of ‘proper’ supervision. It argues that those laws are too vague and subject to arbitrary interpretation.

So far, it has passed ‘Reasonable Childhood Independence’ laws in Connecticut, Michigan, and Nebraska.

DailyMail.com reached out to the Giles County Department of Social Services for a comment but did not immediately receive a response.