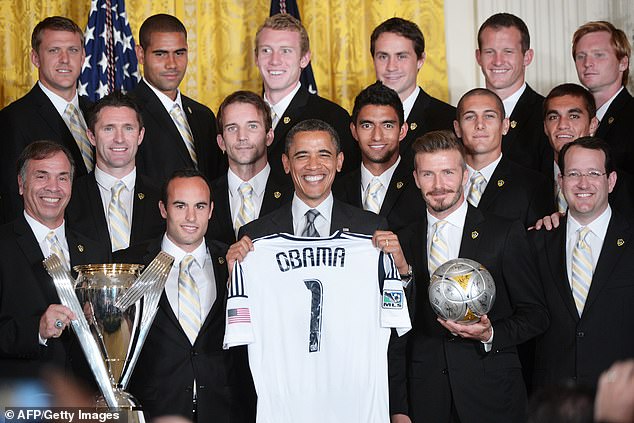 Cristiano Ronaldo and Portugal ‘is like David Beckham in LA – there’s a weight there’, says Landon Donovan – who predicts the team will ‘be different’ when the 37-year-old steps away

Portuguese superstar Ronaldo was dropped to the bench for the last-16 clash with Switzerland and then again for Friday’s quarter-final loss to Morocco.

Fernando Santos’ team ran riot without him in the starting XI against Switzerland with Ronaldo’s replacement Goncalo Ramos scoring a hat-trick in the 6-1 win but Portugal couldn’t muster the same performance against Morocco.

Ronaldo was said to be furious at being dropped to the bench and USA legend Donovan suggested his presence in the roster and the sideshow that accompanies it have been a hindrance to the Portuguese national team in Qatar.

The former forward compared the situation to when England icon Beckham joined MLS side LA Galaxy in 2007.

‘It’s not the same level but I’ll use the analogy, when David Beckham was in LA,’ said Donovan on the State of the Union podcast.

‘He was a top player, made us better in almost every way but there is a weight there and every time Portugal come out of the tunnel or off the bus it’s all about Cristiano.

‘And it’s not his fault, that’s just the reality. That is a weight that weighs on these young men and you have to think going forward when he’s not there, they will probably look like a different team.’

Donovan and Beckham’s relationship in Los Angeles got off to a relatively frosty start when the American questioned the former England captain’s commitment to the side and leadership ability.

However, the pair were able to put tension aside and move on with Donovan admitting he hadn’t given Beckham a chance.

Ronaldo and his place on the bench dominated headlines ahead of both of Portugal’s knockout clashes.

The forward had to angrily deny reports that he wanted to leave the Portugal camp, upon discovery that he would be a substitute for their 6-1 victory in the last-16.

Portugal boss Santos even had to call for the former Manchester United man to be left alone ahead of the team’s quarter-final clash with Morocco.

Santos said: ‘He never told me he wanted to leave. It’s time to finish this and stop. He left the dressing room against Switzerland, warmed up, went out for a run to celebrate the goals with his teammates.

‘He called his teammates to thank them for their effort but he came out and left. He marched alone. Let’s leave Cristiano Ronaldo alone.’

Santos’ decision to bench Ronaldo came in the aftermath of the star’s angry reaction to being substituted in Portugal’s group stage defeat to South Korea.

The manager admitted he ‘didn’t like’ Ronaldo’s reaction, and replaced the former United star with youngster Goncalo Ramos – who netted a hat-trick in a one-sided victory for Portugal.

Since then Ronaldo also hit the news after it was reported he didn’t train with substitutes the day after the match as normal procedure.

He instead opted to do gym work with the starting XI, despite playing less than 20 minutes against Switzerland.

Ronaldo had also caused a furor before the World Cup even kicked off by firing barbs at Manchester United in an explosive interview with Piers Morgan, which eventually resulted in the Premier League club parting ways with him.