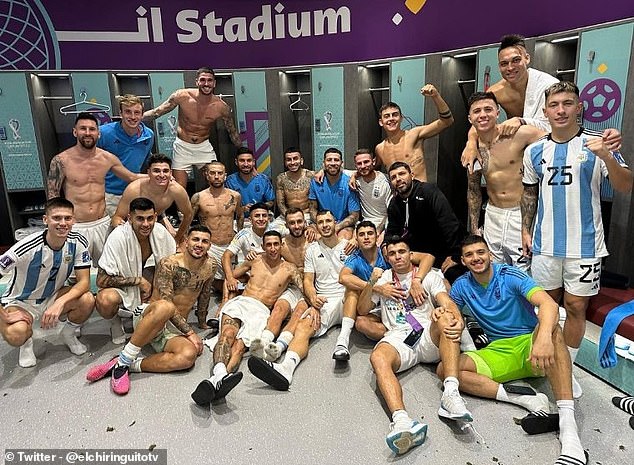 Argentina celebrated making the 2022 World Cup final by enjoying themselves in the dressing room after a convincing 3-0 win over Croatia.

They sealed their spot in Sunday’s showcase through Lionel Messi’s penalty and a brace by Manchester City striker Julian Alvarez.

Whilst they look ahead to the weekend’s big finale against either Morocco or France, they were celebrating in the dressing room at the Lusail Stadium.

The celebratory image was posted to Twitter with the caption: ‘These boys have returned to excite Argentina’.

Messi put in a talisman-like performance during the win over Croatia, dispatching the first goal from the penalty spot, and making a beautiful run past defender Josko Gvardiol before playing in Alvarez for his second and Argentina’s third.

After the match, Argentina boss Lionel Scaloni said: ‘Messi is the best in history. I have no doubt… It is lucky, and a privilege to see him wear the light blue and white’.

Messi’s appearance meant he tied the record for most appearances by a man in a World Cup finals, joining German great Lothar Matthaus.

His penalty also secured a national record, as he overtook past hero Gabriel Batistuta for the most goals scored at the World Cup by a player from Argentina, nabbing his 11th goal from 12 yards out on December 13.

Scaloni’s Argentina became just the fifth side in World Cup history to lose their opening game and still reach the final. The first three all went on to lose the trophy at the end, but Spain emerged victorious in South Africa in 2010 despite an opening defeat to Switzerland.

Argentina’s early 2-1 defeat to Saudi Arabia in Qatar was one of the tournament’s first shocks, and raised questions about whether Messi and his compatriots had what it takes to be in the latter stages.

However, they have since overcome Mexico and Poland in Group C, as well as Australia, Holland and Croatia in the knockout phase on their route to Sunday’s final.

They also have an advantage of an extra 24 hours to prepare for their next match, with Wednesday evening’s decider between surprise package Morocco and 2018 winners France to decide their opponents.