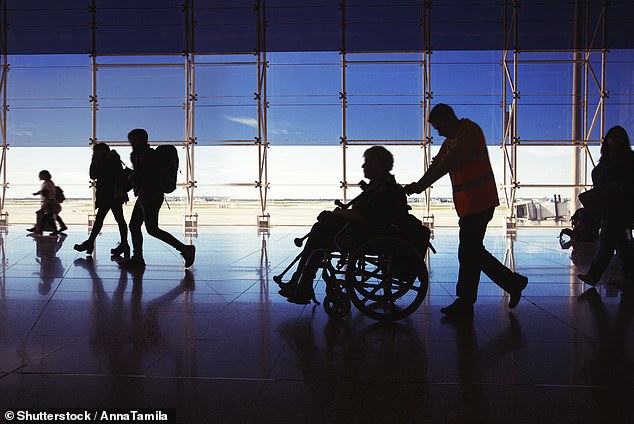 An ‘unacceptable’ number of disabled and less mobile passengers missed flights at Heathrow this summer due to the airport’s failings, a new report has found.

But the worse airport for accessibility was Luton, as it did not improve after ‘too many passengers’ were left waiting for ‘unacceptable amounts of time’ for assistance.

Bristol and Leeds Bradford airports were also slammed by the CAA for failing to make significant improvements to their services between the start of April and the end of October.

Only Aberdeen, Belfast International, East Midlands, Edinburgh, Glasgow and London City were rated as ‘very good’ for the whole period under review.

Some disabled people and passengers with reduced mobility at Terminal 3 were also forced to wait for more than an hour to be transferred from one piece of equipment to another.

This is against CAA guidance, which prohibits long waits at such handover points.

However, Heathrow has shown some improvements since the summer, according to the CAA, after recruiting more agents and introducing new processes that ‘should make the assistance service more passenger focussed’.

Birmingham, London Gatwick, London Stansted and Manchester were rated as poor in spring as they left ‘too many’ disabled passengers and passengers with reduced mobility waiting for too long for assistance on arrival.

However, these airports have made improvements and have now been ranked as either ‘good’ or ‘very good’.

The worse airport for accessibility was Luton, as it failed to improve its services

The regulator acknowledged that airports had a challenging summer, as a sharp rebound in passenger numbers and staff shortages resulted in chaos across the country’s main hubs.

However, it said the quality of assistance provided in April and May at some airports – before chaos erupted – was ‘unacceptable’, with some failing to improve their performance afterwards.

Paul Smith, director of consumers at the UK Civil Aviation Authority, said: ‘The aviation industry has faced unprecedented challenges, but too many passengers at UK airports have been waiting for unacceptable amounts of time for assistance on arriving flights on too many occasions.

‘We strongly believe that everyone should have access to air travel, and we welcome the substantial improvements that airports have made for disabled and less mobile passengers.

‘We will continue to consider whether we need to take further action where airports are not delivering an acceptable level of performance, and not showing sufficient and sustained improvements.

‘We want to see immediate further improvements, as well as airports being well prepared to provide a high-quality service during next year.’