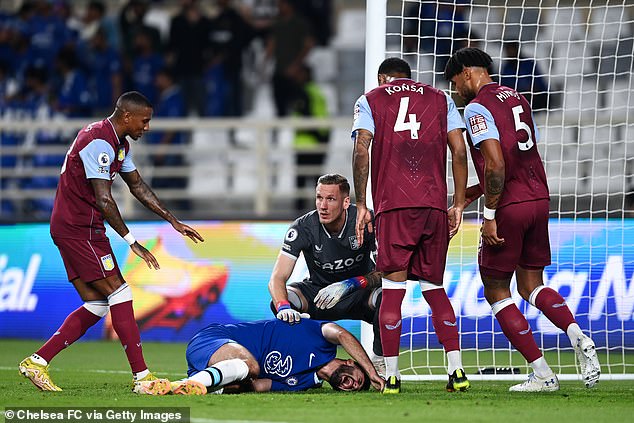 Chelsea striker Armando Broja is ruled out for the SEASON after rupturing his cruciate ligament in a mid-World Cup break friendly, leaving them a forward light while Cristiano Ronaldo lurks as a free agent

Armando Broja will miss the rest of the season and is set for surgery after discovering he suffered a cruciate ligament injury against Aston Villa.

Chelsea striker Broja was taken off on a stretcher after hurting his right knee in an innocuous challenge on Villa defender Ezri Konsa during the Abu Dhabi friendly.

Broja’s audible screams of pain increased concerns he suffered a serious setback and those fears have been confirmed following checks on his injured knee.

Broja had a scan on Monday following his return to England to reveal the full extent of the injury.

He is now preparing to have an operation to repair the damage and the success of that and how he responds will influence the length of his lay-off.

A six-month spell on the sidelines is considered a realistic period out of action which would allow Broja able to return in pre-season with a period of nine up to 12 months the worst case scenario.