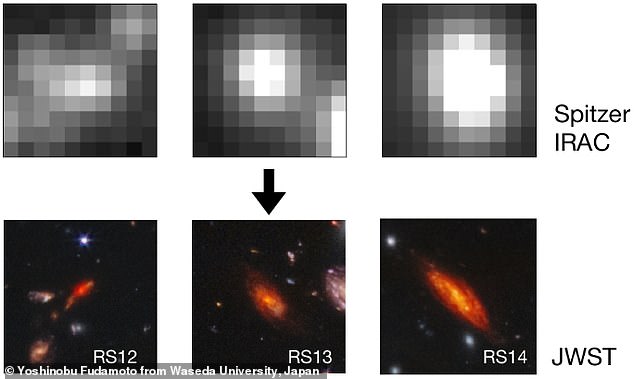 NASA’s James Webb Space Telescope (JWST) is helping scientists unravel the mystery of spiral galaxies and has captured a detailed image of several that belong to the early universe from a period known as the ‘cosmic noon.’

The period is eight to 10 billion years ago when galaxies formed about half of their current stellar mass, making this group the furthest to be seen by human eyes.

While the Hubble Space Telescope and Spitzer Space Telescope have provided observations of these twisted collections of stars and gas, JWST’s ability to capture incredible details will let scientists understand the detailed shapes and properties.

One of the three observed by JWST is a passive spiral galaxy that is not birthing new stars, and the discovery could reveal this rare spiral galaxy is abundant throughout the universe.

While the Hubble Space Telescope and Spitzer Space Telescope have provided observations of these twisted collections of stars and gas, JWST’s ability to capture incredible details will let scientists understand the detailed shapes and properties

Red spiral galaxies are rare, they account for only two percent of galaxies in the local universe, and the color typically means they formed in the early universe.

Because of this, astronomers are looking for these formations, hoping they will tell us more secrets about the early universe.

Using JWST’s powerful mechanics, NASA hopes to reconstruct the star formation history of this galaxy that it believes formed billions of years ago – not too long after the Big Bang.

The morphology of spiral galaxies is of great importance because ‘it offers insight into the formation mechanism of galaxies, when observed across cosmic time,’ according to scientists at Waseda University, Japan, which led the research.

‘Especially the question of when and where galaxy morphology emerged in the early Universe is still under a lot of investigation.’

The results revealed that the red spirals formed at least three billion years after the big bang, the moment the universe began.

Also, one of the detailed images features a passive spiral galaxy, which contradicts the idea that all such formations in the early universe would be active.

By passive, the team means it is not forming new stars.

And JWST’s observation means there could be more lurking in the universe than previously believed.

Junior Researcher Yoshinobu Fudamoto said in a statement: ‘Overall, the findings of this study significantly enhance our knowledge about red spiral galaxies, and the universe as a whole,’

‘Our study showed for the first time that passive spiral galaxies could be abundant in the early universe.

‘While this paper is a pilot study about spiral galaxies in the early universe, confirming and expanding upon this study would largely influence our understanding of the formation and evolution of galactic morphologies.’

Two of the three galaxies are still birthing new stars, while the third is passive – not forming new stars

JWST has snapped other images of spiral galaxies, with one that reveals the chaos of the Cartwheel Galaxy that is 489.2 million light-years from Earth.

Much like that of a wagon wheel, its appearance results from an extreme event — a high-speed collision between a large spiral galaxy and a smaller galaxy not visible in this image.

Other telescopes, including the Hubble Space Telescope, have previously examined the Cartwheel.

But the dramatic galaxy has been shrouded in mystery — perhaps literally, given the amount of dust that obscures the view.

JWST’s infrared capabilities mean it can ‘see back in time’ to within a mere 100 to 200 million years of the Big Bang, allowing it to snap pictures of the very first stars to shine in the universe more than 13.5 billion years ago.

JWST has snapped other images of spiral galaxies, with one that reveals the chaos of the Cartwheel Galaxy that is 489.2 million light-years from Earth

Its first images of nebulae, an exoplanet and galaxy clusters triggered huge celebrations in the scientific world on what was hailed a ‘great day for humanity’.

Researchers will soon begin to learn more about the galaxies’ masses, ages, histories and compositions as the telescope seeks to explore the earliest galaxies in the universe.

If you enjoyed this article…

Also, NASA’s James Webb Telescope unveils a stunning new view of the Pillars of Creation that resembles a ghostly hand reaching out into space

The James Webb Telescope: NASA’s $10 billion telescope is designed to detect light from the earliest stars and galaxies

The James Webb telescope has been described as a ‘time machine’ that could help unravel the secrets of our universe.

The telescope will be used to look back to the first galaxies born in the early universe more than 13.5 billion years ago, and observe the sources of stars, exoplanets, and even the moons and planets of our solar system.

The vast telescope, which has already cost more than $7 billion (£5 billion), is considered a successor to the orbiting Hubble Space Telescope

The James Webb Telescope and most of its instruments have an operating temperature of roughly 40 Kelvin – about minus 387 Fahrenheit (minus 233 Celsius).

It is the world’s biggest and most powerful orbital space telescope, capable of peering back 100-200 million years after the Big Bang.

The orbiting infrared observatory is designed to be about 100 times more powerful than its predecessor, the Hubble Space Telescope.

NASA likes to think of James Webb as a successor to Hubble rather than a replacement, as the two will work in tandem for a while.

The Hubble telescope was launched on April 24, 1990, via the space shuttle Discovery from Kennedy Space Centre in Florida.