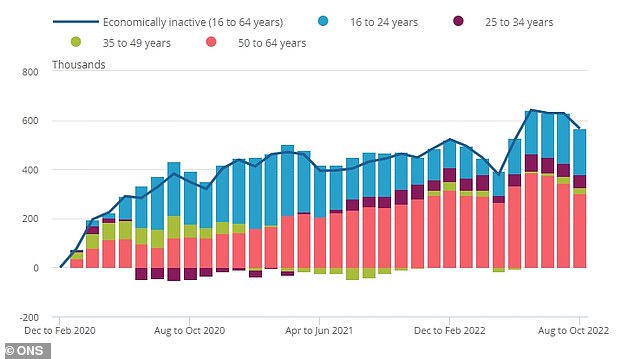 The number of people classed as ‘economically inactive’ is starting to drop, as older people who left the workforce during the pandemic are forced back by the rising cost of living.

Economic activity is different from unemployment, and measures the number of people aged 16 to 64 that are out of work, not seeking work and therefore not claiming unemployment benefits.

ONS statistics published today reveal that the UK economic inactivity rate was estimated at 21.5 per cent in the period August to October 2022, 0.2 percentage points lower than the previous three-month period.

It means that around 76,000 people had stopped being economically inactive.

Back to work: The number of 16-64 year olds classed as ‘economically inactive’ has fallen

The decrease was driven by those aged 50 to 64 years returning to work or ‘unretiring,’ the ONS said.

It represents a turning of the tide after levels of economic inactivity climbed to record highs following the onset of the pandemic.

The last round of figures had showed that economic inactivity rose to 21.6 per cent in the three months to September 2022, a rise of 108,000 people compared to the previous three-month period.

This had been impacted by older people leaving the workforce during the pandemic and not returning, as well as long NHS waiting times which led to an increase in people off work with long-term illnesses.

An increase in younger people staying in education rather than joining the workforce has also contributed.

It’s unlikely that most of them hit the sofa and decided a life of leisure wasn’t for them. Instead there’s every chance that horrible reality has set in

Sarah Coles, senior personal finance analyst at Hargreaves Lansdown, said: ‘Unretirement has kicked in. The economic inactivity rate has been booming since the onset of the pandemic, including plenty of people in their 50s and early 60s who decided that life was too short to spend so much of it at work.

‘They made up 60 per cent of those falling into economic inactivity since the start of the pandemic.

‘However, inactivity has been falling this quarter – driven by this age group. It’s unlikely that most of them hit the sofa and decided a life of leisure wasn’t for them.

‘Instead there’s every chance that horrible reality has set in. They’ve worked out what they can afford to live on for the rest of their lives, and with prices surging all around them, they they need to go back to work.’

The latest ONS figures also showed that the employment and unemployment rates both increased in the period between August and October 2022, compared with the previous three-month period.

The UK employment rate was estimated at 75.6 per cent, 0.2 percentage points higher than the previous three-month period and 1 percentage point lower than before the pandemic.

Total hours worked decreased compared with the previous three-month period and are still below pre-pandemic levels.

Before inflation, total pay and regular pay were both up 6.1 per cent. But in the public sector total pay was up 6.9 per cent, compared to 2.7 per cent in the private sector.