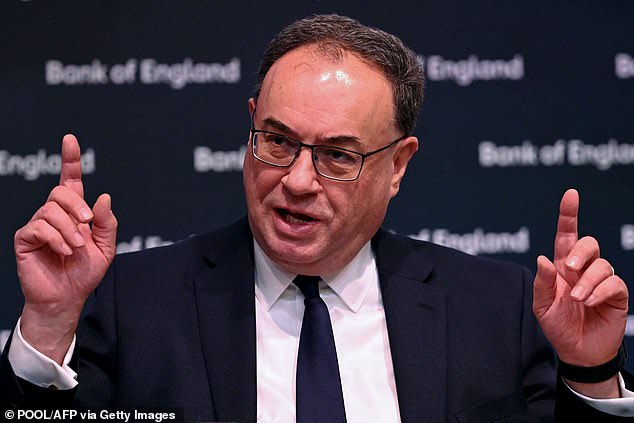 How much will the Bank of England hike interest rates by tomorrow? Slowing inflation boosts expectations of a 0.5% rise to 3.5%

A bigger-than-expected fall in consumer price inflation has boosted market expectations that the Bank of England will opt for a smaller base rate hike on Thursday.

Office for National Statistics Data on Wednesday showed annual CPI fell from October’s 41-year high of 11.1 per cent to 10.7 per cent, prompting cautious optimism that the worst of price pressures are over and inflation has now peaked.

The City had already been anticipating a 50 basis points (bps) rise from tomorrow’s Monetary Policy Committee decision, adding 0.5 per cent to take base rate from 3 per cent ro 3.5 per cent.

This is down from the 75bps base rate hike at the November meeting, and the ONS figures have buoyed this conviction.

Rates are going up: Governor of the Bank of England Andrew Bailey is expected to deliver a 50bps hike on Thursday

Should the BoE follow through with a 0.5 percentage point rise on Thursday, it would mark the bank’s ninth consecutive hike and take the base rate to 3.5 per cent.

Prior to Wednesday’s figures, expectations that the BoE would raise rates by a smaller amount were driven by the need to balance fighting inflation with ensuring these efforts do not push Britain into an even more severe recession.

In recent months, BoE figures have cautioned markets that rates are unlikely to peak as high as consensus suggested at the time.

Macro strategist for global fixed income at Goldman Sachs Asset Management Gurpreet Gill said: ‘We expect the Bank to adopt a less aggressive rate increase of 0.5 per cent this month, after November’s sharp 0.75 per cent rise.

‘While recent GDP data surprised to the upside, growth momentum is weak justifying a slower approach to tightening.’

However, Gill cautioned that ‘broad-based inflationary pressures’ still persist, meaning the BoE is unlikely to stop hiking the base rate any time soon.

Separate ONS data shows wage growth, which is a key determinant of inflation, continues to tick higher as employers scrap to attract and retain staff amid the soaring cost of living.

Not accounting for inflation, average regular pay growth for the private sector was 6.9 per cent in August to October, and 2.7 per cent for the public sector, according to the ONS.

While the City sees a smaller hike at tomorrow’s meeting as near certain, head of market strategy at financial services firm Ebury Matthew Ryan said the move will likely have an impact on sterling and investors should keep a close eye on the MPC’s commentary.

He said: ‘We are pencilling in another 50bps hike, although we suspect that the decision on the magnitude of the rate increase will be far from unanimous.

‘Assuming we see no surprise on rates, the reaction in sterling will, therefore, likely be determined by both the voting pattern among committee members and the bank’s communications in its statement and meeting minutes.

‘In the event of a 50bps rate hike, and an increasingly divided committee, we think that sterling could sell-off, particularly should the statement or meeting minutes once again push back against current market pricing for UK interest rates.

‘That said, another 75bps hike cannot be ruled out entirely. This would be bullish for GBP, given current market pricing.’