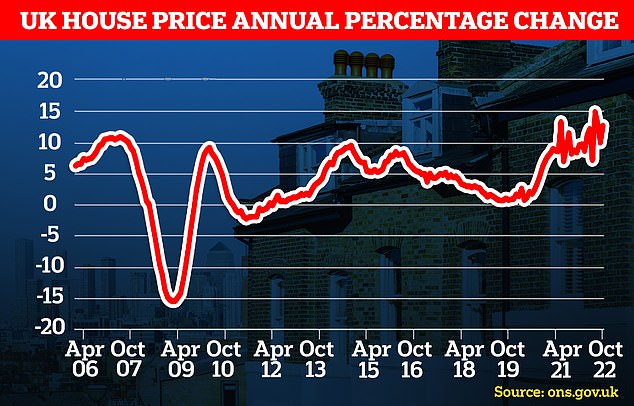 Average UK property prices increased by 12.6 per cent in the year to October, up from a 9.9 per cent rise seen in the 12 months to September, official figures show.

The average UK house price was £296,000 in October, which is £33,000 higher than this time last year and little changed from last month, the Office for National Statistics said.

Shift: Average UK property prices increased by 12.6% in the year to October, the ONS said

On a seasonally adjusted basis, the average UK house price increased by 0.7 per cent between September and October, up from an increase of 0.5 per cent in the previous month.

Aimee North, head of housing market indices at the ONS, said: ‘Annual house price inflation increased in October, although this was mainly because of the sharp fall in house prices at the same time last year following the end of the stamp duty holiday.

How much? The average UK house price was £296,000 in October, according to the ONS

Variations: Average property prices in England remain the highest in the UK, the ONS said

London’s average property prices remained the most expensive of any region in the UK, with an average price tag of £542,000 in October.

But, London was the region with the lowest annual house price inflation, with average prices increasing by 6.7 per cent in the year to October, down from an annual percentage change of 7.4 per cent in September.

The ONS said: ‘London’s annual percentage change was slowed by average London house prices falling by 0.9 per cent between September and October 2022. London was the only region in the UK where average house prices decreased this month.’

Delving into Land Registry data published today, detached homes saw only the third biggest annual spike in prices, rising by an average of 12.4 per cent to £498,885 in England.

What do experts say about today’s ONS data?

The data published by the ONS and Land Registry today is somewhat out of date, in that figures pertaining to more recent times have indicated that average UK property prices are falling amid high inflation and rising interest rates. In recent weeks mortgage rates hit the 6 per cent mark, but are now starting to ease again.

Many experts aren’t convinced that today’s ONS figures reveal the full picture when it comes to what is happening in the UK property market now.

Tom Bill, head of UK residential research at Knight Frank, said: ‘Despite today’s figures, double-digit UK house price growth is now a thing of the past.

‘Even as the reverberations of the mini-budget fade, a more adverse lending landscape is emerging after 13 years of ultra-low rates.

‘When the spring market gets under way next March, mortgage rates will be more than two percentage points higher than at the same point in 2022.

‘This will keep transaction volumes in check and means price declines will become more prevalent. Knight Frank expects UK prices to fall by 10% over the next two years, taking them back to where they were in summer 2021.

‘We think London prices will continue to underperform the rest of the country, with the exception of prime central areas, which will benefit from a higher proportion of cash buyers.’

Jamie Durham, an economist at PwC UK, said: ‘Given the current economic conditions, there is considerable uncertainty in the outlook for the housing market.

‘However, stretched household finances, rising interest rates and a likely recession means a decline in house prices does look likely over the coming months.’

Meanwhile, Myron Jobson, a senior personal finance analyst at Interactive Investor, said: ‘The 12.6% jump in house prices over the year to October 2022 does not mean the property market is heating up again.

‘Instead, it lays bare the distortions caused by the stamp duty holiday – which ended in October 2021 and artificially depressed sales in the months after.’

He added: ‘The harsh reality is more and more wannabe buyers simply can’t make the numbers work. This is likely to bring house prices back down to earth following a meteoric surge in recent history.’

On mortgage rates, Mark Harris, chief executive of mortgage broker SPF Private Clients, said: ‘Inflation slipping to 10.7 per cent will start to ease pressure on the Bank of England but a half-point increase in base rate this month is still expected.

‘That said, the pricing of fixed-rate mortgages continues to ease, with five-year fixes now dipping below 4.5 per cent.

‘We believe they are heading towards 4 per cent as the cost of funds falls, servicing pressure subsides and lenders look to originate new business in the new year.’

What has other recent house price data shown?

On Monday, data from Rightmove suggested that the average asking price of homes being put on the UK market has fallen by 2.1 per cent over the last month, marking the largest pre-Christmas dip of the last four years.

The UK’s biggest property website said the average asking price was £359,137 in early December, which is about £7,862 less than the previous month. The fall in asking prices followed a 1.1 per cent drop in November’s prices.

But, Rightmove added that at the end of this year, average asking prices would still be about 5.6 per cent higher than at this time a year ago, which would be only slightly below the 6.3 per cent growth recorded in 2021.

That said, Rightmove predicted a 2 per cent fall in prices next year, with ‘some locations, property types and sectors faring much better than others.’

Tim Bannister, director of property science innovation at Rightmove, said: ‘After two and a half years of frenetic activity it’s easy to forget that having multiple bidders immediately lining up to buy your home was the exception rather than the norm in pre-pandemic years, and there will be a period of readjustment for home-movers as properties take longer to find the right buyer.’

He added: ‘We’re heading towards a more even balance between supply and demand next year, but we don’t expect a surge in forced sales, which would cause a glut of properties for sale and contribute to more significant price falls in 2023.’

On 7 December, figures from Halifax claimed annual house price growth slowed dramatically in November to just 4.7 per cent, down from 8.2 per cent in the 12 months to October.

Kim Kinnaird, director at Halifax Mortgages, said: ‘The monthly drop of 2.3 per cent is the largest seen since October 2008 and the third consecutive fall.

‘While a market slowdown was expected given the known economic headwinds – and following such extensive house price inflation over the last few years (19 per cent since March 2020) – this month’s fall reflects the worst of the market volatility over recent months.

‘When thinking about the future for house prices, it is important to remember the context of the last few years, when we witnessed some of the biggest house price increases the market has ever seen.

‘Property prices are up more than £12,000 compared to this time last year, and well above pre-pandemic levels.’