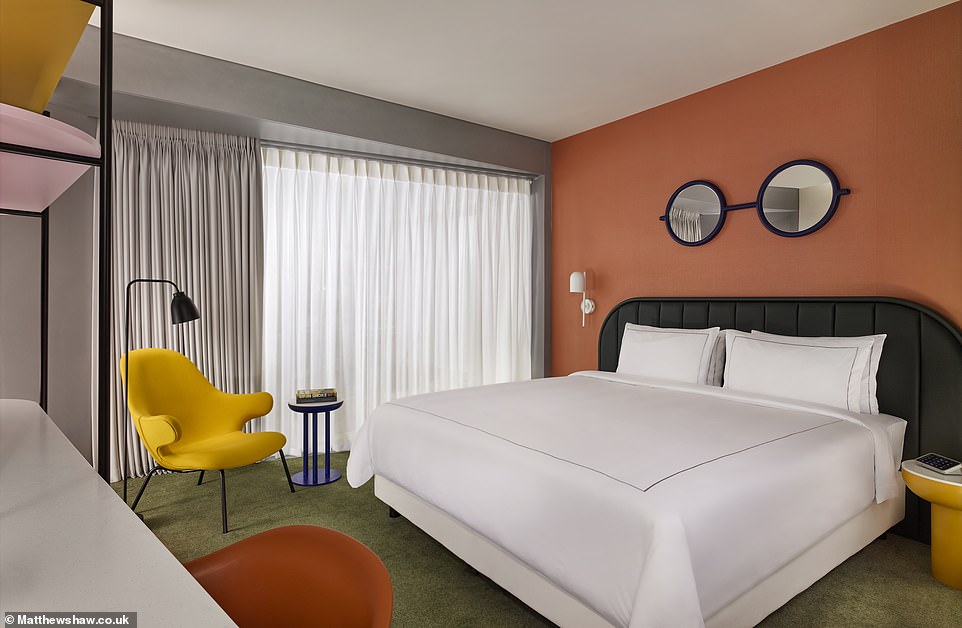 Perhaps it’s unfair to judge a hotel on the day it opens. But here I am at the much-talked-about Art’otel at Battersea Power Station on the banks of the Thames in London, hoping that from my £415 room (breakfast not included) I’ll be able to spy at least one of the four iconic chimneys.

Sadly not. Even so, it’s a thrill to be in the vicinity of this great building, which, after 40 years of wrangling, has finally had some £5 billion spent on it. The results are inspiring.

Art’otel is part of the Radisson group ‘but completely independent’, the receptionist assures me.

So far, around 50 of the 164 rooms are ready, during what she says is a ‘soft opening’ — by which she must mean that prices will harden in the near future.

The Inspector writes: ‘It’s a thrill to be in the vicinity of this great building, which, after 40 years of wrangling, has finally had some £5 billion spent on it. The results are inspiring’

The interiors are designed by Jaime Hayon, with terrific photographs in the lobby area from the KlunderBie studio. My favourite is of a woman with a wellington boot on her head.

Early next year, a restaurant called Joia will open on the 15th floor and above that will be a swimming pool for people who don’t mind being the centre of attention.

For now, food is served on the ground floor in Tozi Grand Cafe, overseen by a chef who once worked at the original Ivy restaurant in London’s West End. Call it imaginative Italian. My burrata is superb and the halibut falls poetically off the bone. At £38.50, I would expect nothing less.

The Inspector says that his ‘modern room isn’t quite special — or modern — enough at these prices [£415)’, but he adds that he likes the ‘huge round mirror and the navy blue, curved, built-in cupboards’

The interiors are by Jaime Hayon, ‘with terrific photographs in the lobby area’

The Inspector says that he enjoyed his stay, but not as much as he hoped he would. Pictured above is the power station’s shopping complex

My modern room isn’t quite special — or modern — enough at these prices, although I like the huge round mirror and the navy blue, curved, built-in cupboards that reflect the general curvature of the building, which sits next to the blocks of flats created by Frank Gehry.

There’s no hot towel rail; only one small bottle of complimentary water; single-use shampoo and conditioner — and the TV is temperamental. Lights are all operated from mini-tablets.

Service at breakfast is not as sharp as at dinner the night before.

My flat white takes an age to arrive, even though only one or two tables are occupied.

‘Hope you have enjoyed your stay,’ says a member of staff. I have — but not quite as much as I’d hoped.