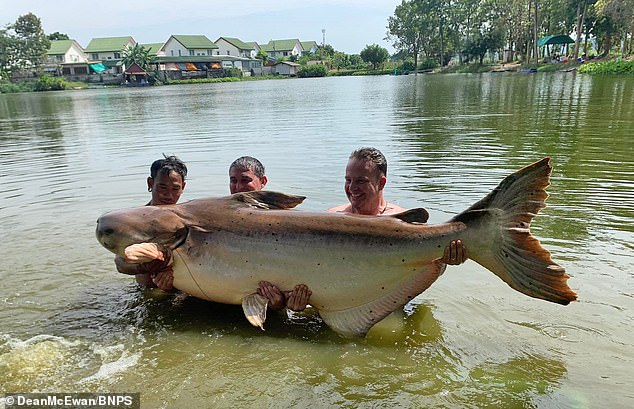 The whopper that DIDN’T get away: British angler lands 30 STONE catfish – one of the world’s biggest – after ‘fight of his life’ to reel in monster in Thailand

By Eleanor Dye For Mailonline

A British angler landed a whopping 30-stone catfish – one of the world’s biggest – after ‘the fight of his life’ to reel in the monster in Thailand.

Dean McEwan, a 36-year-old oil rig engineer from Renfrewshire in Scotland, was stunned when he hooked in the monster Mekong catfish while on a fishing trip at Palm Tree Lagoon Fishery.

The mighty specimen gave Dean the ‘fight of his life’ and it took him an hour-and-a-half to reel it in.

Three men then had to help heave it into a large net so the catch could be measured.

Dean McEwan (centre), a 36-year-old oil rig engineer from Renfrewshire in Scotland, was stunned when he hooked in the monster Mekong catfish while on a fishing trip at Palm Tree Lagoon Fishery

The 7ft long specimen tipped the scales at a mighty 30 stone (420lbs).

While there is no official record for the largest catfish caught by a British angler in Thailand, Dean’s effort is almost certainly the biggest.

He said: ‘The first time you feel the true power of these fish, you understand why they hold the title of the hardest freshwater fighting fish in the world.

‘It was midday and hot when I took my eye off the float for a second only to hear the braid whipping off the spool on my rod.’

He added: ‘I instantly lifted the rod and leaned into it. As soon as it took off I instantly knew it was a big girl.

‘I’ve captured a few catfish before, so I knew what I was in for. There’s really nothing you can do with these fish except take back line whenever you get a chance, usually when the fish changes direction.

‘It was really a test of stamina. After an hour-and-a-half later we landed the fish and let it rest for while.’

After recording its weight and measurements and posing for the obligatory photo, an exhausted Dean released the catfish back into the lake safe and well.

Tim Webb, a British expat who runs the fishery with wife, Benchawan, said: ‘This is the biggest catfish in the lake and probably in Thailand.

‘It is definitely the largest catfish caught by a Brit.’

The Mekong giant catfish is the official freshwater heavyweight champion of the world.

According to the Guinness Book of Records, a 9ft long fish caught in northern Thailand in 2005 weighed 646lbs, making it the largest freshwater fish ever recorded.

As their numbers have drastically declined in the last few decades, they were listed as critically endangered by the World Conservation Union in 2003.