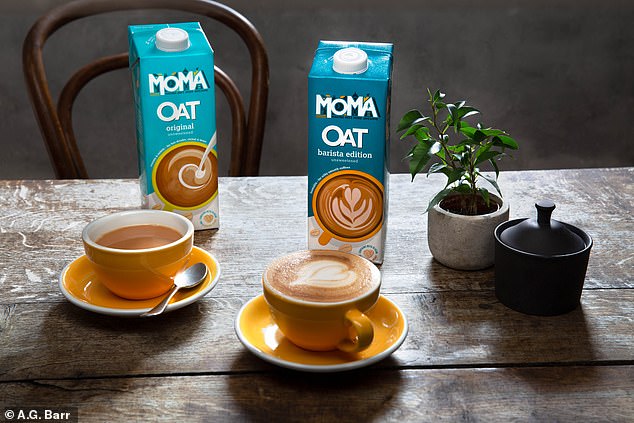 AG Barr has agreed to acquire the remaining stake it does not hold in oat milk producer MOMA Foods for £3.4million.

The Scottish soft drinks firm became the majority owner of South London-based MOMA, which also sells porridge, granola and bircher muesli, when it bought a 61.8 per cent stake at the end of last year.

At the time, it also struck an agreement whereby the two parties could exchange the remaining shares in three tranches over the following three years, thereby eventually giving AG Barr complete ownership.

Takeover: A.G. Barr became the majority owner of MOMA, which sells porridge, granola and bircher muesli food, when it bought a 61.8 per cent stake at the end of last year

Known for making Irn Bru and Tizer, the FTSE 250 firm’s latest deal comes amid a surge in the popularity of plant-based milk alternatives, including soy, almond and coconut.

They are particularly well-loved among Gen Z and millennials, many of whom are drawn to such products for environmental reasons, as well as those who are lactose intolerant and vegan.

Cow’s milk remains by far the most popular milk among consumers, but research published over the summer by Kantar Group found that around one in three Britons had drunk plant-based milk in the previous three months.

MOMA was founded in 2006 by Tom Mercer, who was dismayed by the absence of healthy on-the-go breakfast meals while working as a management consultant at Bain & Company.

He launched his first stall, converted from an old filing cabinet, selling to commuters at Waterloo East Station, and then gradually opening more sites across other London railway destinations.

The business now sells its products across all the major British grocers, including Tesco, Sainsbury’s and Waitrose; in Selfridges department stores; pubs operated by JD Wetherspoon and on board EasyJet flights.

Roger White, chief executive of AG Barr, commented: ‘We are delighted to bring forward the planned full ownership of the MOMA business.

‘This allows us to fully support the MOMA business and brand, such that we can leverage the increased growth potential sooner than allowed for under the original acquisition structure. The completion of the acquisition is a further positive indication of A.G. Barr’s growth ambitions.’

A.G. Barr’s latest move arrives a fortnight after it announced the takeover of energy drinks supplier Boost for £20million upfront, with up to £12million extra depending on the division’s revenue and profit performance in the coming two years.

Headquartered in Leeds, Boost was started by Simon Gray and his wife Alison in 2001 and scored £42.1million in turnover and pre-tax earnings of £1.9million last year.

A.G. Barr shares slid back 0.2 per cent, or 1p, to 516p on Tuesday, although they have recovered by more than 10 per cent since mid-October.