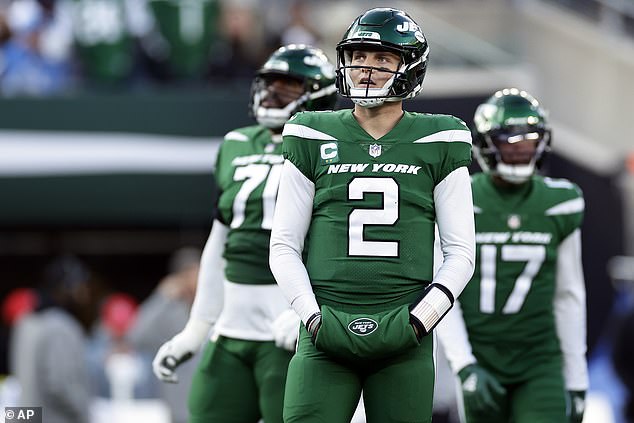 Zach Wilson will once again be the New York Jets starting quarterback this week against the Jacksonville Jaguars on Thursday night.

Head coach Robert Saleh announced the decision on Tuesday due to the status of Mike White’s ribs which were fractured nine days ago against the Buffalo Bills. White also missed last week’s game against the Detroit Lions as he was unable to gain clearance from doctors to play.

In the meantime, Saleh is doing his best to rally around Wilson who was benched and listed as inactive for three games before White was hurt.

‘There are quarterbacks through the history of time that needed just a little bit longer to find their groove,’ Saleh said.

‘For him, it’s just learning the timing and rhythm aspect of it, the intermediate passing game and finding that consistency for four quarters. When he’s in rhythm, and he is hitting on all cylinders, it’s pretty cool to watch.’

In his return to the lineup Wilson had a mixed bag of results. The second-year QB threw for 317 yards and two touchdowns, but he missed several open receivers and threw a costly third-quarter interception.

He also lacked accuracy at times and ended the game with an off-target percentage of 35.3 was a season high, according to ESPN Stats & Information research.

A similar showing most likely would not be enough to permanently get Wilson his job back considering the coaches still were hoping to start White until the last-minute announcement that he would be ruled out on Friday.

‘Everything for Mike is to give him the opportunity to seek second opinions and for him and his team to make sure all the boxes are being checked,’ Saleh said.

‘From our vantage point as coaches, we’re allowing that process to happen. When everything aligns, then we make a decision.’

Saleh also said the team hasn’t ruled White out for the final two games of the season calling it a ‘week-to-week evaluation.’

Due to a mixture of Wilson being injured to start the year and disappointingly ineffective upon his return the Jets have been forced to start three different QBS this season.

In other injury news, the Jets star defensive tackle Quinnen Williams is currently considered to be a game-time decision, as Saleh sounded optimistic his star DT could return from a calf injury.