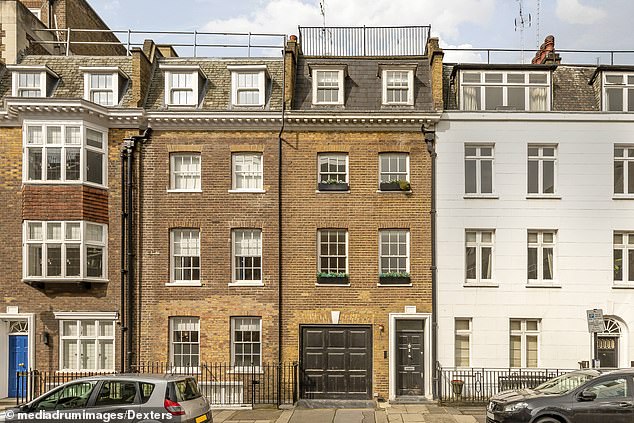 One of London’s narrowest homes, which is as wide as Mini Cooper, has hit the market with a hefty £4million price tag.

The five-storey Westminster terraced house, a stone’s throw away from Buckingham Palace, is little more than 13ft wide.

But it manages to squeeze in five bedrooms, four bathrooms and even has its own rooftop terrace.

The Georgian home is kitted out with a sleek, modern interior, featuring its own spa and sauna, as well as a patio area.

Despite its size, it manages to pack in five bedrooms, two reception rooms and a sleek kitchen, pictured

‘Catherine Place’s narrow layout fronted by two stunning strategically placed sash windows on each floor, permit daylight to enter the full depth of the property, bouncing off each wall creating a spacious and airy dynamic and ensuring that buyers will always be within a few feet of a window, natural light, and fresh air.

‘This exceptional family home presents an opportunity for a discerning buyer with a creative eye to make use of a narrow space in a minimalistic way.’

Size is no issue, with the lower level of the house featuring a fully-stocked spa, complete with a sauna, jacuzzi and large shower.

A spiral staircase leads up to the ground-level patio and ground floor, where there is a private garage and a large dining area.

And it has its own fully-stocked spa, complete with a jacuzzi and sauna room, pictured

Inside, the master bedroom is kitted out in a stylish design, with the home being a stone’s throw away from Buckingham Palace

The property is spread over five floors and even has its own rooftop terrace. Pictured is the living room

The energy efficient property is situated in the heart of London and is on the doorstep of some of the capital’s biggest landmarks, including Westminster Abbey, Parliament Square and Buckingham Palace.

‘A little further afield, Soho and Covent Garden provides a plethora of restaurants, bars, and theatres to choose from,’ the listing adds.

News of the home comes after another one of London’s smallest properties went on the market earlier this year for £1.2million.

The pint-sized pad in Chelsea is a former gravedigger’s cottage and has just 290sq ft of floor space.

The two-storey home, that is just 8ft 2ins at its narrowest, was put up for sale in 2017 for the first time in 50 years.

And in February the capital’s ‘smallest flat’ sold for £90,000. The 75sq ft home had a built-in bed squeezed in above the microwave.

Located in Clapton, east London, the tiny studio apartment sold at auction for £40,000 more than its original £50,000 starting price.