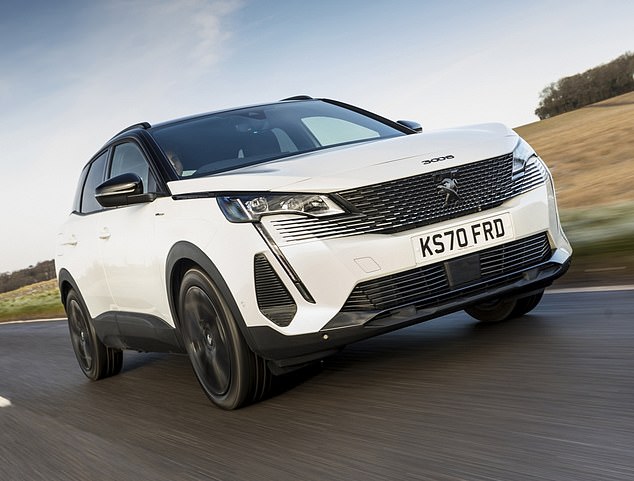 A car for all seasons: RAY MASSEY takes a 600-mile round trip in Peugeot’s electrified 3008 GT plug-in hybrid SUV

By Ray Massey for the Daily Mail

Given the recent weather — from the big freeze’s icy arctic blasts to the gentle winter sunshine — I really needed a car for all weathers.

I found that versatility on a 600-mile round trip in Peugeot’s range-topping electrified 3008 GT Premium Hybrid4 300 e-EAT8 compact SUV crossover — which gave me plenty of opportunity to get a good feel, whatever the weather or the road conditions. Not cheap at £50,930 (including £1,000 extras). But smart and stylish.

And if you’re listening to Middlesbrough-born crooner Chris Rea on the smart infotainment system, it really is pretty good when driving home for Christmas.

Here’s why. It’s a plug-in hybrid so, after a charge, I got between 34 and 40 miles of electric-only range, plus great fuel economy when in mixed hybrid mode.

There’s also plenty of poke from the 300hp combination of a 1.6 litre 200hp petrol engine and a 110hp (81kW) electric motor linked to an 8-speed automatic gearbox, giving 0 to 62mph acceleration of 6.1 seconds up to a top speed of 149 mph in sport mode, and even 84mph in pure electric mode, and frugal hybrid fuel economy.

It’s nippy and grippy on country lanes, it has plenty of mid-range oomph and is sufficiently comfortable with sporty seats and a good satnav. There’s also a decent-sized boot.

Charging takes around four hours from a domestic wall box

Lots of kit and, thankfully, simple control buttons and toggles. Remember those?

It’s nippy and grippy on country lanes, it has plenty of mid-range oomph and is sufficiently comfortable with sporty seats and a good satnav

The 4-wheel drive mode proved invaluable during the big freeze, when I had to scrape the frost off the windscreens and windows and navigate glacially slippery and often ungritted roads.

I started off my epic drive feeling like country singer Johnny Cash — ‘the man in black’ — as my Nera Black crossover also had the chic £400 ‘black pack’ option.

By the time I’d finished, I’d kicked up so much splash from salted A-roads that the car looked more grey and white.

Charging takes around four hours from a domestic wall box. Lots of kit and, thankfully, simple control buttons and toggles. Remember those?

Extras on my car

One in five drivers plans to use their cars less this Christmas and New Year to save money due to inflation — with more than a third (38 per cent) worried about soaring driving costs such as fuel.

But it may prove false economy warns car accessory chain Halfords, which says motorists risk a flat battery when trying to start engines in January if they leave cars undriven over the festive season.

False economy: Halfords says motorists risk a flat battery when trying to start engines in January if they leave cars undriven over the festive season

Nearly a quarter (24 per cent) plan to travel less than usual and one in five say they will leave their car completely dormant over the festive break.

In this case, Halfords recommends regular battery checks. Its research also revealed that more than four in ten do not own a spare car battery, nearly a quarter (24 per cent) admit they don’t know how to change one and a fifth have never checked their battery.

Driving force: Citroen has been commissioned to create Asterix a new set of wheels based on the legendary 2CV

Arguably France’s greatest hero, Asterix the Gaul is a much-loved cartoon and big screen character among children of all ages and nationalities.

And for his latest film outing — Asterix & Obelix: The Middle Kingdom — Citroen has been commissioned to create for him a new set of wheels based on the legendary 2CV.

Its design team sketched and built the 2CV chariot in less than three months — compared to the usual 12 months it takes to create a concept vehicle.

Advertised as being ‘made in Gaul’ and pulled by two horses, the 2CV chariot has a solid oak chassis, wheels made of recycled shields incorporating Citroën’s iconic chevrons, suspension from an inflated boar-gut stomach and headlights using fireflies.

Set in China but with traditional Roman foes, the film will be released over here on Netflix in spring.