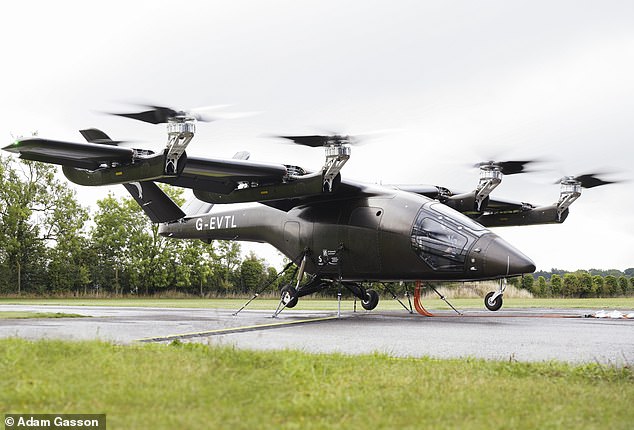 Britain’s first flying taxi will finally take to the skies next year as it moves to the next stage of its testing.

The , which will eventually carry four passengers and one pilot, was unveiled at Farnborough airshow over the summer. A prototype model has already carried out a series of ‘tethered hovers’ – flying at less than five feet while still attached to land.

Its next stage will see the electric aircraft, made by Vertical, begin a series of untethered tests at heights of up to 50ft and speeds of 25mph.

Tethered hover: The VX4, which will eventually carry four passengers and one pilot, was unveiled at Farnborough airshow over the summer

The prototype was mainly built at GKN’s site in Bristol and completed at Vertical’s test facility in the Cotswolds.

The aim is to have the VX4 certified in 2025 when full-scale production is expected to begin.

Bristol-based Vertical listed on the New York stock exchange last December with a valuation of £1.8billion but it has since fallen sharply amid a big downturn for tech stocks.

The company is one of a number racing to lead a market that could transform mass transportation.

The electrically powered vehicles are seen as a cheaper, quieter and emissions-free alternative to helicopters.