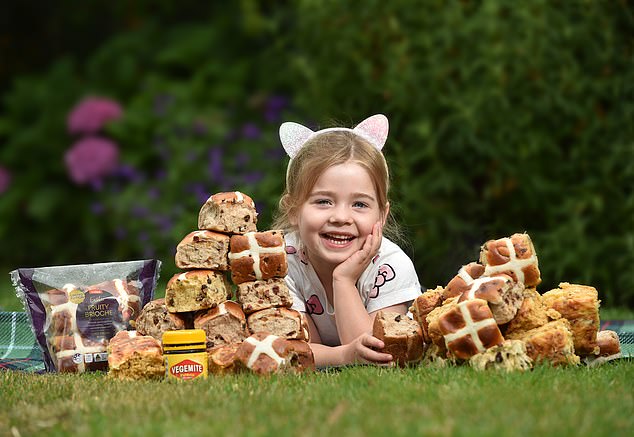 Should Hot Cross Buns be available all year round? Shoppers demand Easter staple become a permanent bakery option as it is revealed more than four million will be eaten before NYE

Hot cross buns are back on the shelves at Woolworths and Coles, with retailers expecting to sell over 4.5million of the treats before January 1.

Woolworths were the first to bring the Easter buns back, lining their shelves on December 26.

While Coles waited until December 27, the Christmas Day public holiday, to release their range.

Coles relaunched their hot cross buns on December 27 this year, a day after Woolworths

Supermarkets often cop criticism for launching their Easter ranges ‘three months early’ but claim the demand is there.

A Coles spokesperson told FEMAIL:  ‘Aussies are expected to consume around 2.5 million hot cross buns from Coles in the five days leading up to January 1.’

While a Woolworths spokesperson added: ‘We sold more than 1.8million individual hot cross buns the first week they were on sale last year, and we anticipate the same as customers look to close off 2022.’

The high demand for the buns didn’t stop people from complaining about them being released ‘far too early’.

‘Are you kidding me, this must be a p*ss take? Take hot cross buns and shove it until Good Friday,’ one angry shopper said.

However others posted on Reddit, accepting the supermarket’s decision.

‘It’s the day after Christmas and it’s time for the annual moment of Woolworths and Coles and other stores to be selling hot cross buns 4 months early. They are always nice though,’ one person posted.

Do you think Hot Cross Buns should be available all year?

‘Not even joking, but I wouldn’t care if they were an all-year item. Sometimes I’m just in the mood for a HCB. Sometimes the classic cinnamon ones, occasionally those Cadbury-infused ones,’ said another.

And the enthusiasm to have them served year-round was hot.

‘They should just remove the cross and put a heart when it’s not Easter. Hot love buns,’ one person said.

‘I agree – just put a circle on them or something – I always crave them in winter,’ said another.

And others said they should do the same with other ‘seasonal’ treats.

‘Egg nog comes out a week or two before Christmas and is only available for 30 minutes before selling out,’ one person complained.

‘I wish I could have mince pies all year too, and gingerbread,’ said another.

Coles have a new fruity brioche bun available and have brought back the cheesey Vegemite hot cross buns for the season, both for $5 for a four pack.

While Woolworths have an indulgent Caramilk option and a fruit-filled option for lovers of the traditional buns, and are also $5 for a pack of four.

They also have apple and cinnamon buns available – for just $4 for a four pack.’

Queenslanders were the next biggest bun eaters followed by New South Wales.

Easter falls on April 9 this year.