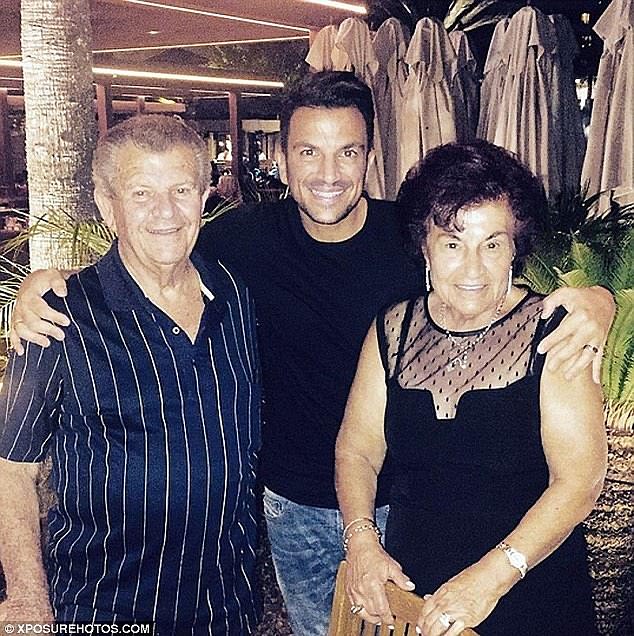 Peter Andre has detailed his fears for the health of his mum Thea, 86, and father Savvas, 79, as they get older.

The singer and TV personality, 49, told MailOnline that Christmas is ‘always an anxious time’, as he explained his attempts to visit Australia, where his parents live, more often.

And hoping to reunite with the pair, who have been married for 67 years, the star is currently planning a family trip Down Under around the festive period.

EXCLUSIVE: ‘It’s always an anxious time’: Peter Andre, 49, has revealed he is attempting to spend more time in Australia as he fears for his parents’ declining health

Peter, who moved to Australia at the age of six, discussed his hopes of spending quality time with Thea and Savvas during a trip with his wife Emily and their blended family.

‘For me, it’s about seeing my mum and dad and the kids and Emily seeing them. That’s what it’s about, they’re getting very old now and it’s always an anxious time of year.

‘I went to Australia earlier this year, I’m glad to be spending more time there because of my mum now. So, I try and go 3 or 4 times of year if I can now,’ he told MailOnline.

Worried: The singer has expressed worry for his 86-year-old mother’s health and explained that his parents are ‘getting very old’

Sweet: Peter is hoping to visit Australia with kids Junior, 17, and Princess, 15, from his first marriage to Katie Price, wife Emily and their kids Amelia, eight, and Theo, five (L-R Amelia, Theo, Junior and Princess)

Adding that it is worrying to see his mother struggling more with age, Peter expressed his hope to ‘spend as much time as possible’ with her.

And making it a family affair, the Mysterious Girl hitmaker added: ‘If we go, we go as a family’, as he plans to bring his children Junior, 17, and Princess, 15, who he shares with ex-wife Katie Price. Along with his and Emily’s two children; Amelia, eight, and Theodore, six.

But the trip is proving difficult to plan for Christmas itself, with Peter explaining that Emily’s job as an NHS doctor means she can’t take a large chunk of time off over the festivities.

‘She’s not doing great’: The singer, 49, said he is ‘sad’ to see his mum Thea, 86, ‘struggling’ as she gets older now her health has started to decline

‘But theres no exact dates because of Emily’s work, you know, when you work for the NHS you don’t just get to say oh “I’m gonna go away”,’ said Peter.

‘We haven’t worked out the exact dates but we’re definately gonna go between now and the end of January.

Continuing: ‘So, basically we still haven’t confirmed the dates as of right now. But definitely between now and January. If we go, we go as a family. The question is whether we go before or after Christmas because of the kids school and everything.’

And the time away comes before a jam-packed year for the star, who has recently teamed up with plant based company Beyond Meat for a new partnership.

Busy schedule: But the trip is proving difficult to plan for Christmas itself, with Peter explaining that Emily’s job as an NHS doctor means she can’t take a large chunk of time off over Christmas

Speaking on the collaboration, he discussed early years with his parents in Australia – reminiscing that the family would eat a mix of meat, vegetarian and vegan meals growing up.

Going back to these roots, Peter now enjoys a flexitarian lifestyle and is hoping to inspire others to do the same with the partnership – which will see him ask members of the public to swap out their meat and stock up their cupboards with plant-based products from the brand.

While the star is also set to take to the stage once again in the coming year to celebrate 30 years in showbusiness with a slew of events and stage shows throughout the year, beginning in March.

As part of the #FirstStepBeyond campaign, which encourages people to take their first step to going plant based this Veganuary, Peter has launched the chance to win a luxury weekend away in London and cook with him. To enter, visit the Beyond Meat website.

Family: ‘If we go, we all go as a family,’ added Peter as he attempts to plan the trip around his four children’s school holidays (son Junior, 17, pictured with his grandmother)