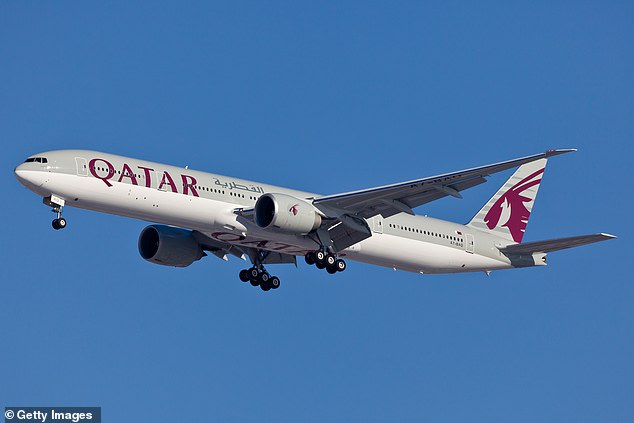 A Qatar Airlines flight headed to Doha from Brisbane was forced to turn back to the airport for an emergency landing after passengers spotted something hanging off the wing.

However, barely 15 minutes into its journey, the plane stopped climbing at 10,000 ft and headed out to sea to begin a holding pattern off Queensland’s coast.

The plane dumped most of its fuel off the coast before landing back at Brisbane Airport just after 12.30am on January 1 – meaning hundreds of passengers spent their New Year’s Eve in a circling plane.

A passenger on the flight, designated QR899, revealed on Twitter why the plane was forced to turn back.

‘Passengers noticed something white hanging/coming off the right wing,’ he tweeted.

‘Pilot came and took a look through passenger windows, shining a torch onto the wing.

‘Seatbelt sign was never turned off, and we headed back to Brisbane.’

The passenger said he didn’t see the white thing himself but was told about it by air stewards.

Flight Radar 24, which tracks planes across the world, showed the Qatar Airways plane doing a figure eight over the water.

It is standard procedure for a long-distance flight to dump fuel and lighten the aircraft before an emergency landing.

A spokesperson for Brisbane Airport confirmed the plane turned back because of an issue with the aircraft.

Qatar Airways told aviation website Paddle Your Own Kanoo that the plane landed safely after suffering ‘a technical issue’.

‘Passengers are being assisted by ground services which includes providing hotel accommodation before resuming their journey at the earliest opportunity and we apologise for any inconvenience caused,’ the statement said.