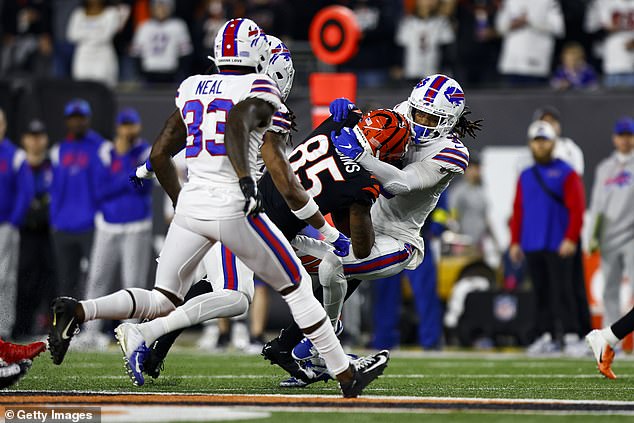 ‘You HAVE to remove the armor!’: Sports fans implore NFL to make changes to uniforms and be more like rugby in the wake of Damar Hamlin’s cardiac arrest… as they claim players currently use pads as ‘weapons’

Sports fans have called for the NFL to consider changes to uniform armor after Damar Hamlin’s on-field cardiac arrest.

The 24-year-old Buffalo Bills player is said to have ‘made progress’ with his ventilator usage reduced from 100 percent to 50 percent late on Tuesday.

Hamlin collapsed following a collision with Cincinnati Bengals receiver Tee Higgins on Monday and was rushed to hospital after receiving emergency medical treatment at the stadium.

Should the NFL remove armor from uniforms?

The Bills safety may have suffered a one-in-200million heart injury that shut off blood to his brain and triggered a cardiac arrest, doctors say.

The horrifying moment has brought attention back to what NFL players wear and whether armor should be used.

Football just like rugby involves brutal hits and powerful tackles but the English sport does not include any padding.

Some fans have questioned whether NFL players would change the way they tackled if they didn’t have the protection of armor.

One Twitter user commented: ‘I wonder what would happen if they removed all the pads and gave them leather helmets?

‘The reason they go balls to the wall with hits is because they wear armor. You [don’t] see dudes launching themselves like that in rugby.

‘If you don’t have all the armor they would have to tackle differently like rugby.

‘You have to remove the armor. The hit on Hamlin was due to the running back using his hard shoulder pads as a weapon. Can’t do that in rugby.’

In the conversation, another replied: ‘Football is a beautiful sport. It’s also a bloody sport, and I don’t see it carrying on for too many years like this. Something’s gotta give.

‘There was a push years ago to get the NCAA to make rugby-form tackles the standard, but I don’t think it went anywhere.’

In the wake of Hamlin’s cardiac arrest, another social media user said: ‘@NFL It’s time to revisit equipment helmet, body armor, and anything else. Don’t wait another day… reach out to these companies and scientists – let’s get it done. Thank you. #damarhamlin.’

While one said: ‘I realize it’s counterintuitive but football might be safer re organ impact injuries if there was less body armor, not more.

‘It’s body armor that has increased the force of impact contact between players. It may protect against some injuries but not this.’

Another social media user wrote: ‘#NFL desperately needs new pad technology. They need to eliminate spine compression injuries for neck and back and chest cavity. I recommend some form of shell like a knights armor works. Lightweight & protective against impact.’

Jordon Rooney, a family friend and representative for Hamlin, revealed the family’s dismay that Higgins – the Bengals player involved in the tackle with Hamlin – was receiving a backlash online.

‘Damar’s parents were frustrated that Tee was receiving negative backlash, he’s reached out and supported Damar and his family,’ he said to ESPN Tuesday.

ESPN’s NFL analyst Bart Scott has been branded ‘despicable’ for suggesting Higgins was at fault for lowering his helmet in the collision with Hamlin, moments before the Bills player collapsed due to a cardiac arrest.

Over the summer, the NFL revealed a new league-wide soft-shell Guardian Cap for training camps ahead of the 2022 season to limit head injuries.

Hamlin (No. 3) got on his feet briefly after making the tackle on Higgins before falling backwards in shocking scenes as the Buffalo Bills played Cincinnati Bengals