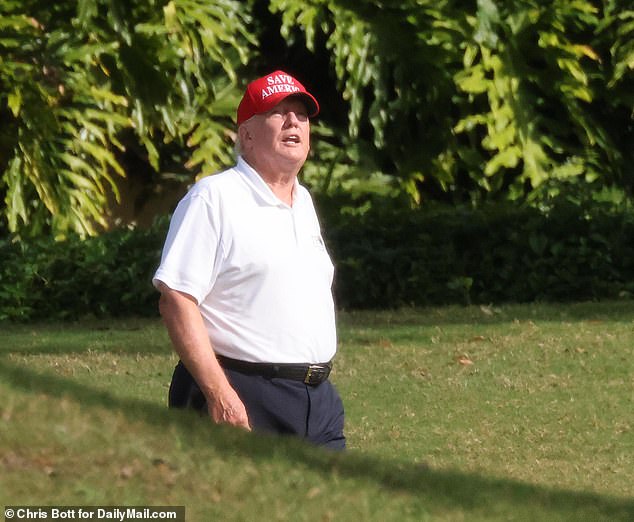 Donald Trump played a round at his Palm Beach golf course on Wednesday after throwing his weight behind Kevin McCarthy to be Speaker of the House.

The former president donned his trademark red MAGA hat and white shirt in photos captured by DailyMail.com, hours after he urged Republicans to unify behind the candidate and end the voting in the House.

Trump has been a longtime ally of McCarthy and was calling Republicans overnight to try and drum up support after 20 Republican saboteurs derailed his bid to take the gavel from Nancy Pelosi.

‘Some really good conversations took place last night, and it’s now time for all of our GREAT Republican House Members to VOTE FOR KEVIN, CLOSE THE DEAL, TAKE THE VICTORY,’ Trump posted to Truth Social on Wednesday morning.

‘REPUBLICANS, DO NOT TURN A GREAT TRIUMPH INTO A GIANT & EMBARRASSING DEFEAT,’ he continued in all caps. ‘IT’S TIME TO CELEBRATE, YOU DESERVE IT.’

‘Kevin McCarthy will do a good job, and maybe even a GREAT JOB – JUST WATCH!’

The former president donned his trademark red MAGA hat and white shirt in photos captured by DailyMail.com, hours after he urged Republicans to unify behind the candidate and end the voting in the House

The former president urged Republicans not to turn their victory taking the House in the 2022 midterms into an ’embarrassing defeat.’

Republicans met in the morning in attempt to reach an agreement between McCarthy and the 20 dissenters – nicknamed the ‘Taliban 20’ by Rep. Don Bacon of Nebraska – and the House will reconvene at noon to continue efforts to elect a new House Speaker.

Representative Matt Gaetz, one of the lawmakers holding out against McCarthy’ said that Trump’s endorsement is ‘sad.’

‘This changes neither my view of McCarthy nor Trump nor my vote,’ he told DailyMail.com.

Rep. Chip Roy of Texas, who defected against McCarthy, was far more blunt about the criticism on the ‘Never Kevin’ coalition. In a radio interview on Wednesday morning, Roy lashed out against former speaker Newt Gingrich who criticized the impasse. ‘I don’t have time for listening to fossils… sitting on Fox News.’

A senior Republican source in the House told DailyMail.com that Trump’s post was ‘definitely helpful,’ but it’s unclear yet if it’s done anything to move the needle on ‘Never Kevin’ lawmakers.

Gaetz tweeted Monday that ‘Supporting McCarthy is the worst Human Resources decision President Trump has ever made.’

The ex-president, who announced a 2024 White House run in mid-November, also boasted that he was receiving a flurry of calls from lawmakers hoping to gain his endorsement.

Trump pleaded with Republicans to take their ‘fight’ to Senate Republican Leader Mitch McConnell and his wife Elaine Chao, who was the former president’s Transportation Secretary.

He also apologized for endorsing McConnell and helping him win another term in the 2020 election cycle.

‘If Republicans are going to fight, we ought to be fighting Mitch McConnell and his domineering, China loving BOSS, I mean wife, Coco Chow,’ Trump wrote in a Truth Social post including a racist nickname for his former Cabinet official.

‘The harm they have done to the Republican Party is incalculable,’ the ex-president added. ‘Today, he couldn’t be elected ‘Dog Catcher’ in Kentucky (Sadly, he only won because of my Endorsement, went up 21 points – SORRY!).’

Republicans’ first day in the House majority did not go as planned.

Trump looks on after playing a shot. Republican dissenters have stood firm in the opposition of McCarthy despite the ex-presidents rally cry

Trump lines up a putt on his Palm Beach golf course, with Congress still in limbo without a Speaker

McCarthy lost three ballots for Speaker because of opposition from a growing group of conservative rebels – despite House Freedom Caucus Vice Chairman Jim Jordan coming out in strong support for the California Republican.

Instead, 20 House Republicans sunk McCarthy’s bid by throwing their support behind Representative Jordan, who has repeatedly said he does not want the gavel.

The House adjourned after the third vote and will reconvene at noon on Wednesday.

The failed bid Tuesday was the first time in 100 years that a Speaker was not chosen in the opening vote.

The first and second votes for speaker saw 19 Republicans vote against McCarthy for other candidates. The third round of votes saw McCarthy’s hopes of the top spot in the House shrink even further, with at least one more Republican voting against him.

When his name was called for a vote, Florida GOP Representative Byron Donalds dropped McCarthy in favor of joining the conservatives who backed Jordan.

He said afterwards that McCarthy simply does not have the votes to be Speaker.

Trump told Republicans to ‘take the victory, & watch crazy Nancy Pelosi fly back home to a very broken California’. Going into Day 2 of the 118th Congress, it’s still unclear who will take the gavel from outgoing Speaker Nancy Pelosi