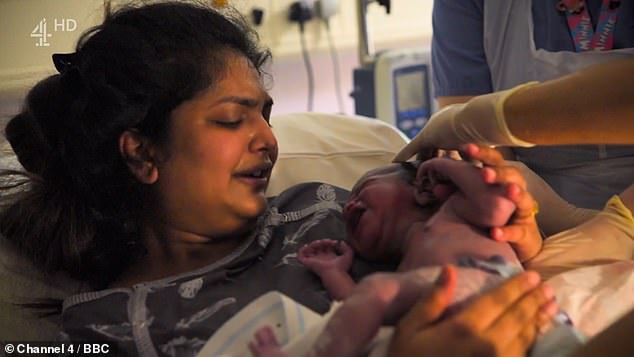 Viewers have been left in tears after the emotional first episode of Belfast Midwives, calling the nurses ‘angels’.

The Channel 4 documentary, which aired at 10pm last night, followed midwives at Royal Victoria Hospital in the Northern Ireland capital as they helped mothers give birth.

After watching the episode, which dealt with baby loss, c-sections and natural births, viewers were left feeling emotional and took to Twitter to express their gratitude for the midwives.

One viewer said: ‘Now I’m crying. Someone give these midwives a pay rise, walking angels.’

As well as the midwives, viewers also praised the mothers giving birth – including Sundera, who gave birth naturally without any pain relief.

Watching Sundera’s calm demeanour despite being in unimaginable pain, viewers were quick to praise her on Twitter.

Viewers have taken to Twitter to praise ‘amazing’ midwives after the first episode of Belfast Midwives aired on Channel 4 at 10pm last night. They also praised one mother, Sendura, who gave birth without any pain relief and remained incredibly calm throughout labour

Deirbhile, a midwife at the Royal Victoria Hospital, appeared in the first episode of the documentary series

One person wrote: ‘This lady is so calm and all without pain relief… What a superwoman.’

Another said: ‘No pain relief, she’s a brave woman!’

After Sundera gave birth, her midwife, Deirbhile, placed the baby girl on her chest so she could hold her for the first time.

Other births covered in the episode included a water birth and a c-section – at which point the midwives recalled squeamish fathers they had met in the past.

One midwife recalled how she once told a squeamish father: ‘Put a chair behind you because if you faint, we’re just going to step over you.’

Another recalled a time when she was in the operating theatre to perform a c-section and the father, who was 6’5, fainted on top of her.

‘I was there trying to hold him up,’ she laughed.

Another of their colleagues recalled a father fainting by his wife’s side while she was giving birth.

She said: ‘As the baby was being born [the father] just fell down the side of the bed and cracked his head off the floor.. and the mum said to him “look at you stealing my thunder”.’

Although there were some funny moments in the episode, it dealt with serious and sad aspects as well.

One midwife, Aimee, who had been working in the profession for eight years, revealed her own story after helping a young woman through labour.

After offering a few tricks to help the mother’s labout along, including walking sideways up the stairs, Aimee shared her experience with baby loss.

She recalled finding out she was pregnant as a teenager, when she was in her final year of school.

Aimee said: ‘As you can imagine, that came with a lot of emotions.’

She recalled taking her final school exams and leaving school before giving birth to a son. However, sadly her little boy was born with a serious health condition.

‘He had a cardiac problem that, the more time that went on, the worse it became and the sicker he became,’ she recalled.

‘He went for surgery at 4 weeks old and passed away a couple of days later.’

Reflecting on the pain of losing her child, Aimee said it inspired her to become a midwife.

She said: ‘Up until that point I didnt ever realise how precious life is. I think that’s what’s so lovely about my job… I get to celebrate life every day.’

After watching the emotional rollercoaster episode, viewers praised the midwives on Twitter for their warmth and professionalism.

One woman wrote: ‘Midwife Aimee is such a a great example of what a midwife should be!’

Another, who had had a water birth like one of the mothers in the episode, recalled how her experience had been very similar. She said: ‘My midwives were spectaular just like her amazing midwives.’