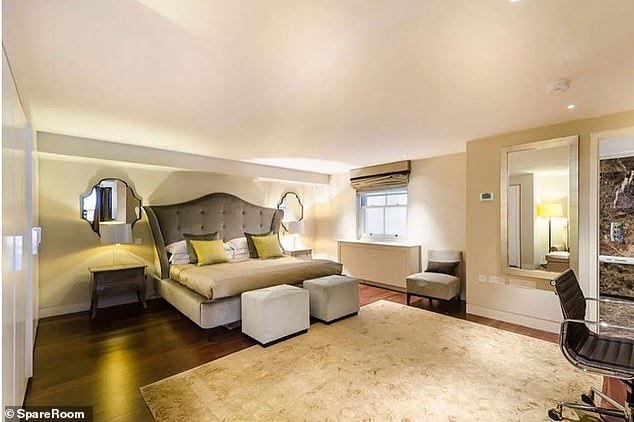 Britain’s fanciest flatshare? Double bedroom near Mayfair which boasts access to a pool, gym and sauna goes on the market for £3,800 a month

By James Reynolds For Mailonline

Londoners can now rent a double bedroom in Lancaster Gate for £3,800 per month.

The bedroom, situated between Mayfair and Kensington in prestigious west London, has a shared living room, a balcony and one other person to live with.

The ideal flatmate is described as a non-smoker without pets, and couples are not allowed to rent the room.

A double room in Lancaster Gate, London, with an asking price of £3,800… per month

How the other half lives: the suite includes a shared living, balcony, sauna and gym for tenants

The room, now available to the right flatmate, is situated between Mayfair and Kensington

Bills are reportedly included in the price tag, which also comes with access to a pool and sauna

The advert on rental app SpareRoom reads: ‘I am an aesthetic Doctor and travel a lot.

‘I have a two bed luxury flat with a pool, gym, sauna etc.

‘I was thinking of sharing my flat with a person either professional or student.

‘Please message me for further details and photos of the flat. Have a nice day.’

The flat appears to be situated in the development The Lancasters, where a two bedroom apartment is listed on the estate agents Savills’ website for a whopping £8.95 million.

According to Savills: ‘The Lancasters is a highly sought after development set behind a white stucco fronted Grade II Listed period façade that dates back to the mid-1850’s and was once the largest terrace of its kind in Europe.

Stunning views of the apartment in W2, which borders some of London’s most famous areas

What cost of living crisis? Rents in W2 average £990/week, above the £873 London average

Foxtons reported that property rental in the W2 postcode average £990 per week, significantly more than the £873 London average.

Built Asset Management reported last year the average age of renters flatsharing across greater London in July 2022 was 30.6, climbing considerably from 28.2 in February 2020 as Londoners are priced out of homes within commuting distance.

London is the third most expensive city in Europe, behind Zurich and Geneva in Switzerland.

But renters can rejoice that average rental prices fell for the first time since 2021 this year – by £1.

According to real estate services company JLL, rental prices in London may grow another 15% by 2025.

The company forecasts 3% growth in 2023 as Londoners struggle for space and inflation prompts landlords to raise prices.