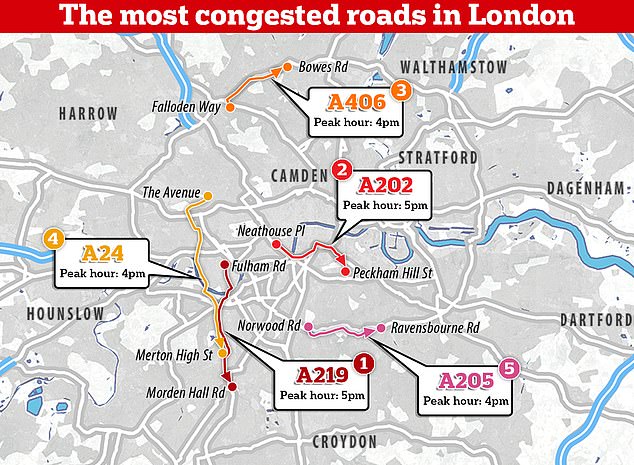 There are few feelings worse than the one drivers get when they turn onto a road and see a string of tail lights stretching into the distance.

But now you can know which roads to avoid, as the 15 most congested corridors in the UK of 2022 have been revealed – with the top four all in London.

Taking the top spot was the A219 southbound from Fulham Road to Morden Hall Road, where drivers spent 47 hours in traffic.

This is a major route out the capital and sees a lot of commuters, while the continued closure of the Hammersmith Bridge has also contributed to delays.

London has been named the worst city for congestion in the world, according to the INRIX 2022 Global Traffic Scorecard. London’s most congested roads are pictured

Outside of London, the busiest route was in Birmingham – A45 eastbound from Bordesley Circus to Henry Road – costing drivers 37 hours

The findings show that traffic in London has gotten worse, as the busiest road in 2021 – A503 eastbound – saw drivers lose just 42 hours to queues.

The next three busiest routes of 2022 were the A202 eastbound, A406 eastbound and A24 southbound, which all cost drivers between 38 and 45 hours of delay.

Outside of the capital, the most congested road was in Birmingham – the A45 eastbound from Bordesley Circus to Henry Road.

Last year, drivers spent a total of 37 hours sat in a queue along this route, with wait times of up to nine minutes.

Much of this congestion occurred due to road works that have run throughout the latter part of 2022, as well as traffic incidents.

Data firm Inrix also revealed the top 10 cities for hours lost to delays per driver, with London again coming first on the list with 156 hours.

Bristol came second with residents each facing 91 hours of delay, despite the city only having one route in the top 15 worst corridors for traffic congestion.

They were replaced by Edinburgh, Leeds and Leicester, that came 7th, 9th and 10th respectively.

In total, sitting in congestion is said to cost £707 for the average driving, costing the country £9.5 billion.

The INRIX 2022 Global Traffic Scorecard calculated the cost for drivers by determining the median commute distance for each urban area.

The authors considered area-specified fuel prices and the car fuel efficiency for each country, and assumed drivers commuted 240 days of the year.

Outside of the capital, the most congested road was in Birmingham – the A45 eastbound from Bordesley Circus to Henry Road (pictured). This was the fourth busiest road in the UK in 2022

The A6177 southbound between Bolton Road and Greater Horton Road in Bradford, Leeds (left) was the seventh worst corridors in the UK for traffic congestion in 2022, and the second worst outside of London. Just after it came the A435 southbound from Haden Circus to Wynfield Gardens in Birmingham (right), which saw drivers face 33 hours of traffic last year

London’s roads suffer more congestion than anywhere else in the world, with its drivers stationary for an average of 156 hours in 2022

The statistics put London’s car problems ahead of 1,000 other cities worldwide for the second year in a row.

The finding comes despite the £15/day congestion charge in central London and £12.50 charge for driving in the Ultra Low Emissions Zone (ULEZ) in older vehicles.

Bob Pishue, transportation analyst and author of the report: ‘It is great to see civic and commercial life returning to normal, but unfortunately, we’re seeing congestion inching closer to, if not exceeding, pre-pandemic levels.

‘We must manage congestion while improving mobility and accessibility in cities to avoid it hurting economic recovery and impacting the quality of life of commuters and residents.’

If you enjoyed this article:

The most hated 50 yards of road in Britain: A baffling sign has helped land drivers with fines totalling £6 million — and counting — in a Low Traffic Neighbourhood

‘The traffic wardens sit in their cars until 8.31am… then they pounce’: Life on UK’s worst road for parking tickets where drivers were hit with 32,000 fines totalling £2.26m over two years

Traffic jams are caused by drivers braking too much, scientists say

Drivers only have themselves to blame for traffic jams, scientists say.

A new study found that the human behaviour of tapping brakes for no reason triggers a ripple effect where each car behind will hit its brakes harder than the one in front, causing a slowdown or complete gridlock.

The experiment involved 100 vehicles with AI-powered cruise control systems driving during morning rush our on the I-24 in Nashville, Tennessee, USA.

The systems automatically slowed the car down or sped it up to keep a safe distance from other drivers and smoothed the traffic flow so that there was 98 percent less braking and ultimately fewer traffic jams.