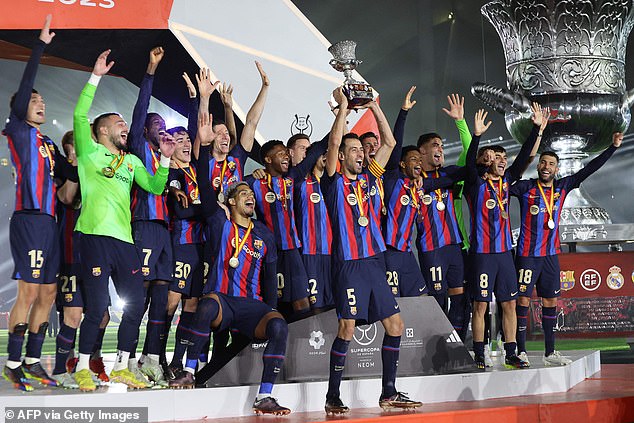 Glorious Gavi delivered a brilliant display as Barcelona saw off Real Madrid in the Spanish Super Cup final to give Xavi his first trophy as the club’s coach.

The Spain midfielder is only 18 but he has the street smart of a veteran as well as all the punchy energy of a fearless teenager. He won Fifa’s Golden Boy at the end of last year and he started 2023 dominating the first final of the Spanish season.

He scored the first and then set-up the second and third as Barcelona took control of the game in a sparkling first half and finished the job in the second.

The good news for Xavi is that it wasn’t just Gavi who shone. Ronald Aruajo dominated at the back, Frenkie de Jong was superb in midfield and buzzing around Robert Lewandowski up front Pedri and Ousmane Dembele ran a tired flat looking Real Madrid ragged.

The opening goal came on 33 minutes and it was an error from Antonio Rudiger that provoked the chain of events. He was perhaps still groggy after being caught by his own goalkeeper Thibaut Courtois who came for a high ball and clattered his defender in the process.

It was Rugidger’s loose pass to Eduardo Camavinga that opened the door and Barcelona swarmed through it. Sergio Busquets won it, Dembele nudged it to Pedri who helped it on to Lewandowski who teed-up Gavi. He took one touch and then shot left-footed past Marc Andre ter Stegen.

On 45 minutes it was two and this time roles were reversed. De Jong played a long ball forward to Gavi who crossed for Lewandowski to finish side-footed past Courtois for his 20th goal this season in all competitions.

Barcelona deserved their first half advantage. Their first big chance had come on 13 minutes when Pedri skipped past various challenges. His shot was blocked and when it ran to Lewandowski, Courtois pushed his shot on to the post. The rebound ran to Alejandro Balde who thrashed it into the side netting.

Benzema had Madrid’s first chance with Ferland Mendy crossing deep from the left. The Frenchman’s header went wide. Despite the fatigue of two semi-finals hat went to penalties both teams were playing with a high intensity. Barcelona had switched Araujo from centre-back to right back to take care of Vinicius and the tactic had worked well.

Barcelona started the second half as well as they ended the first with Busquets putting Lewandowski through and Courtois saving. Barcelona were playing at a different speed to Madrid and Carlos Ancelotti took Modric off after 65 minutes hoping Dani Ceballos would inject some intensity. He would make the error that led to the third goal.

His cross-field pass to Militao was intercepted by the still effervescent Gavi who then fizzed down the right where he was found by Lewandowski. He whipped in the cross and Pedri converted from close range – it was turning into a rout.

Marco Asesnio came on and he tested Ter Stegen from distance but long shots and the tireless direct running of Vinicius who had by now drawn a yellow card from Araujo was all they had. There was one long passing move with Barça pinging balls around their opponents as if they were training cones and it ended with a frustrated Rodrygo upending Busquets.

It was Rodrygo who then had Madrid’s best second half chance drawing a full-stretch save from Ter Stegen.

There was a late consolation when proud Madrid laid siege to the Barça goal in added time despite the contest being decided and Benzema scored from close range. His complete lack of celebration told the story – this was Barça’s night.

Scroll down to see how it all unfolded with Sportsmail’s live blog.