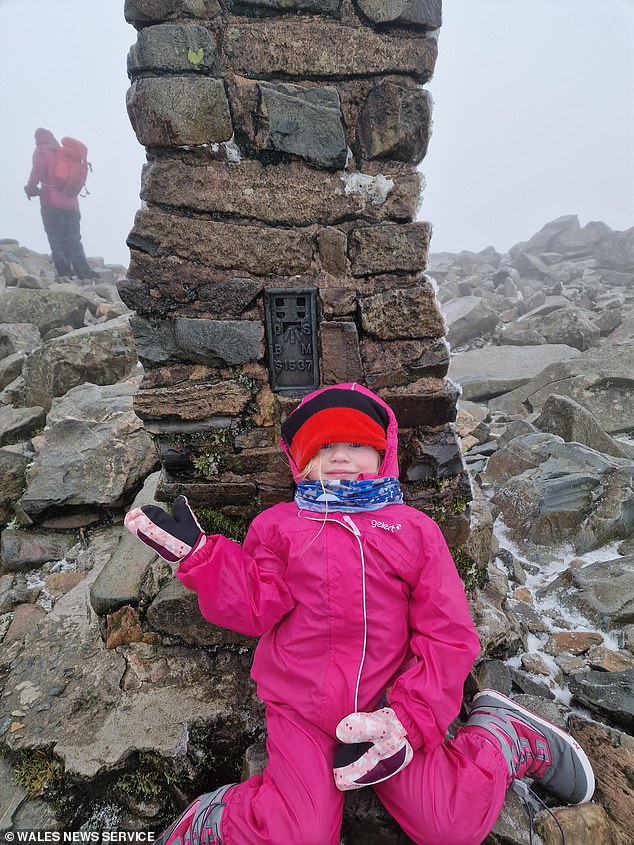 A five-year-old girl has smashed a record, becoming the youngest to climb Britain’s highest peaks in under 48 hours – and even carried out a mountain rescue in her stride.

Seren Isla Price, from Llangennech, Carmarthenshire, took on the mammoth challenge with her dad Glyn to climb Snowdon, Ben Nevis and Scaffell Pike.

She became the youngest ever to complete the climb of the highest mountains of Wales, England and Scotland in less than 48 hours.

Her eventful climb even included a mountain rescue after Seren and Glyn spotted a walker who needed help getting down the mountain.

It came as the pair were reaching the top of Ben Nevis and noticed a group of hikers huddling around a woman.

Brave Seren leapt into action to lead the way with her torch – and even offered the woman a Lucozade drink in a bid to boost her energy.

Dad Glyn said: ‘She needed help going down the mountain, we called mountain rescue as she was quite fatigued and they were working their way up from the bottom.

Seren (pictured) became the youngest ever to complete the climb of the highest mountains of Wales, England and Scotland in less than 48 hours

The youngster (pictured) even gave a helping hand to a fellow climber who was struggling, giving the woman some of her Lucozade

Plans: now Seren and father Glyn are hoping to climb Mount Kilimanjaro, Mount Everest base camp, and scale Mount Toubkal in North Africa in the future

Fearless: despite describing the climbs as ‘very difficult’, Seren (pictured) has plenty more plans for peaks she’d like to scale in the future

‘It took about two hours to get her down the zigzag path, down to the reservoir where the mountain rescue meet us with the air ambulance.

‘Seren was brilliant in the fact she gave Lucozade to the lady to help give her energy and was helping her down the mountain.’

The youngster began climbing mountains with dad Glyn was she was just three-years-old – and has already scaled the Welsh three peaks.

Seren (pictured) starting scaling peaks with her father Glyn when she was just three-years-old. The pair has plans to tackle even more ambitious climbs nows

Peak: Seren (pictured here at the summit of Pen Y Fan) has described the gruelling climbs as ‘very difficult’

Duo: however, the five-year-old (pictured) has not let that stop her – and has many future climbs planned with her father Glyn (pictured)

Thanks to her hard work climbing, Seren (pictured) has raised almost £800 for Birmingham Children’s Hospital, which helped her when she was a baby

She first planned to attempt her latest challenge in 24 hours but the walk was delayed due to the rescue.

She has raised just under £800 for Birmingham Children’s Hospital as they helped her when she was a baby.

The father-daughter duo hope to climb Mount Kilimanjaro, Mount Everest base camp, and scale Mount Toubkal in North Africa in the future.