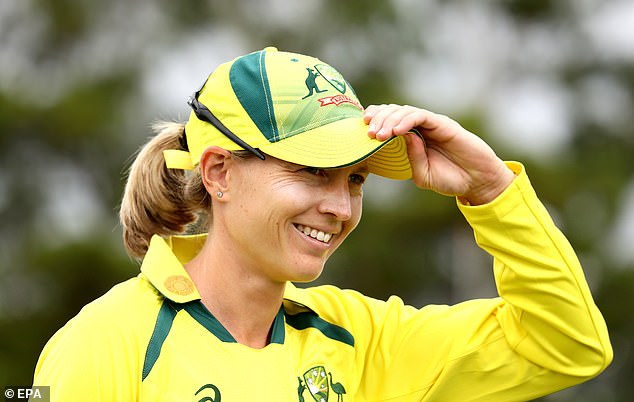 Meg Lanning revealed she rediscovered her love of cricket by working in a cafe as she took time away from the game.

The 30-year-old decided to take a sabbatical after Australia won gold at the Commonwealth Games in August in a bid to ‘switch off from cricket’ and plan the next stage of her career.

Instead of setting the field and batting, Lanning found herself serving coffees ‘and washing dishes’.

Stepping away from cricket brought a refreshingly new perspective for the Aussie star, who took over the captaincy of the national side aged just 21.

‘Just going in and not knowing what the day will look like – could be busy, could be quiet – and having different conversations with the customers, actually found that really cool,’ she told CricInfo.

‘Having that little bit of freedom, a little less structure, going with the flow a little more, not getting too worried about things. Working at the café allowed me to do that and had a lot of fun.’

A multiple World Cup winner in both the 50 and 20-over format and an Ashes winner, Lanning admitted she wasn’t too sure of what to expect from her hiatus away from the sport.

Lanning stepped away from the game after in August, noting she needed to ‘spend time focusing on myself’

But it soon became clear that while living outside cricket’s heavily-structured environment helped her recharge her batteries, the allure of the field was too hard to resist for now.

‘[It] became pretty clear that I still wanted to play cricket and loved the game, just needed some time to be able to feel normal, have a bit less structure around what I was doing,’ she said.

‘Having done that, I feel really refreshed and ready to go.’

Lanning made her return to action for Victoria earlier this month and played her first game for Australia on Monday, helping her team to an eight-wicket win over Pakistan in Brisbane in the opening match of the three-ODI series.

She made 67 off 76 balls and along with 19-year-old debutant Phoebe Litchfield, who made an unbeaten 78 off 92 balls, steered Australia to chase their 158 total under the DLS system with 67 balls to spare.

Earlier, Australia’s spinners restricted Pakistan to 8-160 in their reduced 40-over innings after rain interrupted play.

Lanning was one of Litchfield’s childhood idols growing up and the teenager revealed batting with the returning captain was a dream come true.

‘I’ve never batted with Meg or played with her and she is just the best batting partner,’ Litchfield said.

‘She knows exactly what to say and when. Whenever I felt under pressure she either scored a four or came down the other end and gave me some words of advice.

‘Welcome back. It looks like she hasn’t missed a day.’