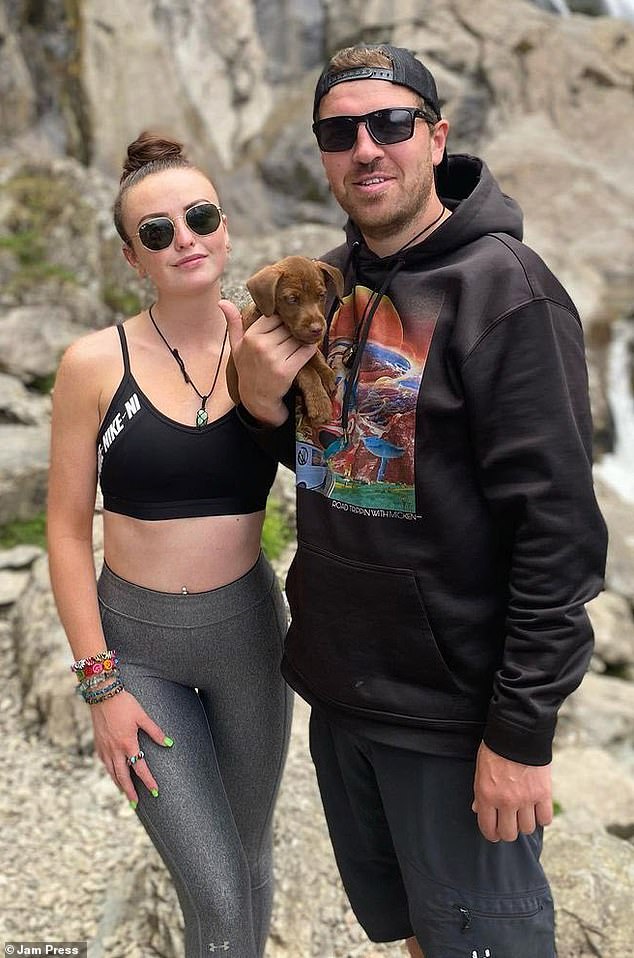 A couple from Liverpool has revealed how they ditched city life to live in a van – with the move saving them hundreds of pounds a month.

Kennedy Lacy, 26, and partner Michael Shaw’s journey began four years ago when the pair bought a converted Volkswagen transporter and began going on weekends away.

They fell in love with life on the road and decided to move into their van permanently two years ago.

The pair were previously living in a house with family members.

Kennedy Lacy and Michael Shaw decided to ditch their city life to take to the road in a van instead, which has saved them money and led to a more exciting lifestyle

Now the couple spend their days travelling all around the UK in their motor home, saving hundreds of pounds on bills, with their monthly outgoings totalling between £230-£450, depending on petrol usage.

‘[Doing this] has helped save hundreds of pounds a month – with the rising costs of rent it’s a great alternative to live a cheaper life,’ Kennedy said.

‘No two days are the same, at first it feels like a big holiday until you realise it’s a lifestyle so you slow down to enjoy the moments knowing you don’t have a flight to catch in a few days.’

‘In the summer we love kayaking and paddle boarding. We also go wild swimming and cliff jumping.

According to the couple (pictured), when they first moved into their van, life ‘felt like a big holiday’

The couple first bought a van four years ago. They fell in love with life on the road and decided to move into it permanently two years ago

‘In the winter we love climbing up snowy mountains and having campfires under the stars.

‘It’s great just going round the different shops and villages to have a nose too.’

The adventurous couple are saving hundreds on their bills by staying in campsites, with their biggest expense being petrol.

Kennedy said: ‘Electricity is free as we run off solar panels and a split charge, this is basically what runs from the engine battery to our three leisure batteries.

Kennedy says that with the rising costs of rent, van life is a great alternative and offers a cheaper lifestyle

The couple (pictured) now travels around the UK, getting to see different regions and meeting new people

Since they took to the road, the couple have set up camp in forests, mountains, farms and sometimes even pubs

However, they never stay in the same place for more than four months, and always move on to somewhere new

Now the pair (pictured) have toured around the whole of the UK, from Scotland to Cornwall

‘As of yet we have not changed it since September and it’s still going strong. I would say we go through three a year.

‘For example, when we lived down in Cornwall, everything was close and easy to get to.

‘It was no more than an hour’s drive to go somewhere new so we spent around £80 a month.

The couple (pictured) originally bought a van four years ago. They fell in love with the lifestyle two years ago and decided to move into it permanently

After decking out the van for life on the road, the couple started touring the UK

Their van home saves the couple hundreds every month, as they save cash which would otherwise be spent on renting a house or flat

‘However, when we were in Scotland which is a much bigger place it would cost us around £300 for a round trip and of course the petrol prices are going up.’

The couple also work on the road to help cover their expenses, with Kennedy as a travel influencer as well as picking up odd jobs.

She said: ‘I love seeing new places and meeting new people and I enjoy getting seasonal jobs in different parts of the UK.

‘I recently worked in an ice cream hut on the beach of Crantock in Newquay, Cornwall.’

Michael (pictured) was struggling with his mental health after a tragic incident, says Kennedy – and their new lifestyle helps

According to Kennedy (pictured), before moving into the van, she was ‘very much a city girl doing the same thing every weekend and going out to town’

So far, the couple have set up camp in forests, mountains farms and sometimes even pubs – but they never stay in the same place for more than four months.

On why they decided to move into the van, Kennedy said: ‘We were fed up and needed a huge change.

‘Before van life, I was very much a city girl doing the same thing every weekend and going out to town.

‘Mick was struggling with his mental health from a result of a tragic incident.

Despite not having constant access to home comforts like a bath, shower, or washing machine, the couple (Michael pictured with dog Buddy) enjoy their van life

‘We started our journey off by going away in our old van, a Volkswagen T5, on weekends and immediately loved it and moved in.

‘Now four years down the line, we are full time van lifers living in our new self-converted transit van with our adventure dog, Buddy.

‘One of the main factors for this lifestyle is that it massively helps with Mick’s mental health since we are out here in nature.

‘We love everything from nature walks to urban exploring and visiting different towns to see what’s on offer.’

Although they love what van life has to offer, there are some things they miss about home life.

All seasons: Now the couple (pictured) live in their van all year around, enjoying different aspects of their lifestyle depending on the season

While their lifestyle offers many advantages, there are some minor downsides, which Kennedy lists as ‘being able to get in the bath and the use of a washing machine and shower all the time’

Kennedy (pictured with dog Buddy) earns money through her work as a travel influencer, as well as picking up some odd jobs

The couple (Kennedy pictured) has gained a following online, after sharing some of their adventures via their TikTok account (@scousersinavan)

‘Best way’: Kennedy says the couple’s loose planning is ‘the best way and who knows where we will end up’

Kennedy said: ‘We miss day-to-day things like being able to get in the bath and the use of a washing machine and shower all the time.

‘Also being able to have down time, as with life on the road you’re always moving, so it can wear you out at times.

‘It’s challenging yet so rewarding.’

The travelling couple rose to fame online with their TikTok account (@scousersinavan) after they began posting daily videos about their new life living in a van.

They now have more than 64,000 followers and 1.7 million likes across their videos.

Kennedy (pictured) and Michael’s bills depend on where they live – in some areas, they will spend more on costs like petrol

The couple are now setting their sights on travelling Europe in their motor home, after enjoying adventuring around the UK

Kennedy says they have no real plan for exactly where they will travel next, as they ‘prefer not setting a plan or routine as [they] love to live wild and free’

In 2021, Kennedy and Michael bought a new van, a Ford Transit, and decided to covert it themselves with very little experience.

However with the help of YouTube and fellow ‘van lifers’, the pair managed to pull off their transformation, costing them less than £3,500.

The couple are now setting their sights on travelling Europe in their motor home.

Kennedy added: ‘Our plans are to travel all over but we prefer not setting a plan or routine as we love to live wild and free.

‘It’s the best way and who knows where we will end up.’

Water – Free at campsites and fill up using rain water.

Campsite – £10 to use facilities only