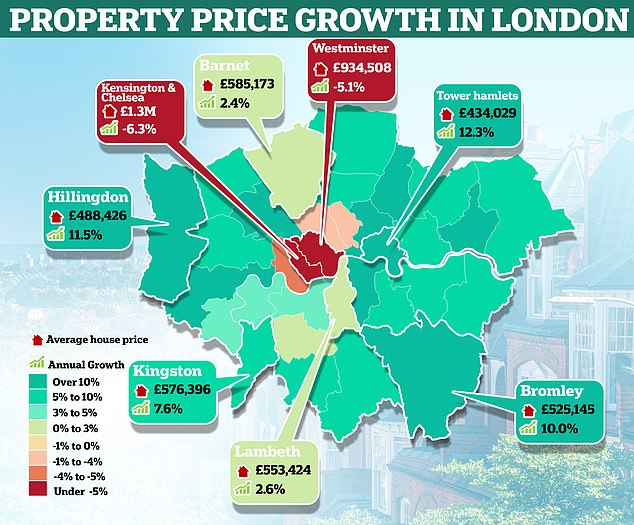 London is still out-pricing the rest of the country when it comes to property buying, the latest UK House Price Index has revealed.

The capital’s average house prices remain the most expensive of any region in the UK, with an average price of £542,300 in November 2022.

But the capital was also the English region with the lowest annual house price inflation, with average prices increasing by 6.3 per cent in the year to November 2022.

This was down from an annual percentage change of 6.7 per cent in October 2022.

The average cost of a home in London varies greatly depending on the borough, data from the Office for National Statistics has revealed

The boroughs with the biggest house price rises in the year to November were Tower Hamlets, Brent, Hackney and Hillington which all saw annual growth exceeding 11.5 per cent.

The average property in Barking and Dagenham, London’s cheapest borough, set buyers back £359,800 in November, but saw annual growth of 10.6 per cent.

Meanwhile, the average home in Kensington and Chelsea, one of London’s most expensive areas, cost £1,349,778 but saw the biggest dip in annual growth with -6.3 per cent.

Zaid Patel, director at London-based estate agents, Highcastle Estates said: ‘With the rise in interest rates, budgets seem to have decreased, hence the cheaper areas have some of the biggest rises.

‘For this exact reason, we’ve seen buyers change their locations to the cheaper parts of east London.’

Meanwhile, latest data from the ONS revealed that the average UK house price in the UK rose by 10.3 per cent in the year to November 2022.

However, house prices were down from 12.4 per cent in October.

The north east – comprising of County Durham, Gateshead, Newcastle, North Tyneside, Northumberland, South Tyneside and Sunderland – continued to have the lowest average house price of all English regions, at £163,000 in November 2022.

The region to experience the highest annual percentage in the year was the north west (Cheshire, Cumbria, Greater Manchester, Lancashire and Merseyside), at 13.5 per cent, the ONS found.

‘There were also monthly decreases for average house prices in England, Wales and Scotland, although the average UK house price remains higher than the same period a year ago.

‘The north west showed the highest annual growth in the year to November 2022.

Ashley Thomas, director at Magni Finance, said: ‘London as a region compared to the rest of the UK normally gets impacted first by house price growth.’

‘Whether that’s a slight dip as is the case now or the best growth when the prices are increasing astronomically.’

Joe Garner, co-founder of NewPlace, said: ‘Pockets of London are seeing huge rises in housing values such as the borough of Sutton which boasts great schools and green spaces, as well as great travel links and strong employment opportunities. ‘

Meanwhile, Kylie-Ann Gatecliffe who is a director at mortgage brokers KAG Financial said that she was seeing more prospective buyers moving away from London, to places such as York – which has seen 10 per cent annual growth.

The city of York is seeing more interested house buyers with average house prices standing at £324,000 – over the national average, according to a property expert

It comes after property experts Zoopla found the pandemic trend of moving out of towns and cities to rural and seaside communities is slowing down.

Ms Gatecliffe said: ‘The biggest trend we have seen is actually people moving away from London.

‘We’ve seen many go from living in a flat in London, to a three-bed semi up north as the trade off in area has allowed a better property budget.

‘Affordability issues has affected the more expensive areas, as people become more aware of where every penny is going.’