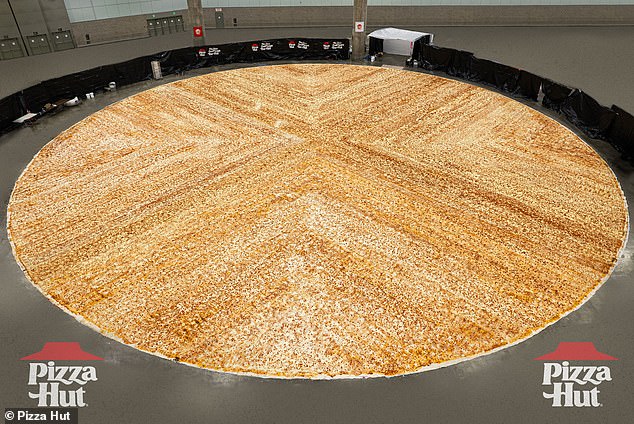 A pizza history! Pizza Hut breaks the Guinness World Record for BIGGEST ever pie – unveiling a 13,990 SQ FT creation topped with 8,800lbs of cheese and 630,000 pepperoni

By Charlie Lankston For Dailymail.com

Pizza Hut has taken a hefty slice of the Guinness Records pie after cooking up what has officially been labeled the world’s biggest ever pizza.

The pizza chain enlisted a team of workers to put together the giant pie, which required a staggering 13,653 pounds of dough, 4,948 pounds of sweet marinara sauce, more than 8,800 pounds of cheese and 630,496 regular and cupped pepperoni.

Ultimately, the final pie measure in at a whopping 13,990 square feet – earning it the title of the world’s biggest pizza.

In order to construct the pizza, a team of people spread individual squares of pizza dough across an enormous floorspace at the Los Angeles Convention Center, before painstakingly topping them with the marinara sauce, cheese, and pepperoni.

Pizza Hut has broken the Guinness World Record for biggest ever pizza after constructing an enormous pie that measured close to 14,000 square feet

It was put together inside the Los Angeles Convention Center, with a team of workers painstakingly placing layers of dough, before covering them up with sauce and cheese

And – having presumably failed to find an oven big enough to accommodate the sprawling spread of dough and cheese – the company then heated the pie from above in sections, moving the baking device across the pizza in order to ensure each bit was properly heated.

The mammoth pie produced around 68,000 slices of pizza when it was completed, David Graves, President of Pizza Hut, revealed while overseeing the construction of the dish – which was created in honor of the chain bringing back popular 90s dish, The Big New Yorker.

The New York-style pizza is set to return to menus on February 1, having disappeared from Pizza Hut’s list of staple dishes years ago.

According to the chain, the pizza features ‘six foldable slices’ that are designed to be eaten like a classic $1 slice you would typically find in a New York pizzeria.

Construction on Pizza Hut’s enormous record-breaking pie began on Wednesday – however the chain had a painstakingly long two-day wait before it received the official thumbs-up from the Guinness team, who confirmed that they had succeeded in their cheese-infused task.

The mammoth pie produced around 68,000 slices of pizza when it was completed

When the pizza was completed, Pizza Hut donated the slices to local Los Angeles food banks

‘Our customers have been begging us to bring back the Big New Yorker for more than two decades, so we knew we had to do something big,’ Graves said in a statement.

The pizza chain teamed up with YouTube star Eric ‘Airrack’ Decker on the stunt, which was also held in celebration of the online creator reaching his 10 million subscriber milestone.

‘Thanks to my community, 2022 was a big year for our channel and I promised them that we’d break this record if they helped me hit 10 million subscribers on YouTube, so here we are delivering on that promise,’ Airrack said of his involvement.

According to Pizza Hut, the completed pie went to a very worthy home when it was fully-cooked (and photographed), with Graves revealing that they donated the slices to local food banks and charities in Los Angeles.

‘The great thing is, none of it’s going to waste, we actually donated it to some local food banks here in the Los Angeles community, so we’re really excited about that,’ he explained.