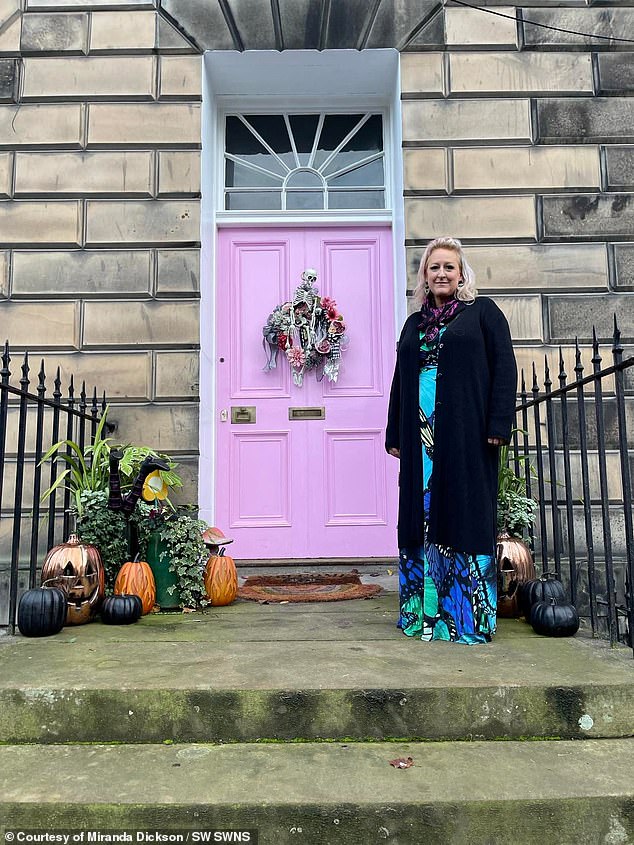 Mother-of-two, 48, loses battle with officials after painting the front door of her Georgian home pink – and must now change it to ‘an appropriate dark and muted colour’

By Alexander Butler For Mailonline

A mother-of-two has been ordered to change her pink front door after losing a battle with officials who said it breached regulations.

Miranda Dickson, 48, clashed with council bosses who said her door in Edinburgh’s New Town, a World Heritage Conservation site, had to be changed or she could face a £20,000 fine.

Ms Dickson spent 18 months renovating her childhood home when she inherited it in 2019 after her parents passed away.

But she was left stunned when City of Edinburgh Council said the new door was ‘not in keeping with the historic character’ of the listed building and had to be changed by April of this year.

Miranda Dickson, 48, who argued her door was ‘pale pink’ and in keeping with regulations, has been ordered to change her front door’s colour

Ms Dickson said her street, Drummond Place, is filled with brightly coloured front doors, and compared it to Notting Hill, in London, or Bristol (Pictured: Other coloured doors on her street)

She appealed to the Scottish Government in a bid to overturn the ban and insisted her door was ‘pale pink’.

Dickson earlier said she would be asking to paint it ‘dark crimson’ if her appeal failed.

She said: ‘I am appealing on the fact the door is painted pale pink not bright pink.

‘I was not initially aware permission was required to paint my own front door.

‘My neighbours both painted their doors recently and did not have to ask permission so this was something I was unaware of as it is not a permanent alteration to the property and guidelines on painting appear to be only for painting the building.’

Government reporter Steve Field said the pink door had breached rules and recommended it should be changed to white.

He said: ‘In relation to painting, the guidance advises that ‘doors should be painted an appropriate dark and muted colour.’

‘It is evident from photographs produced by the appellant and from my site inspection that the pink paint used on the door is neither dark nor muted.

‘I consider that this does not preserve the door as a feature of architectural or historic interest.’

Ms Dickson had hoped to keep the colour and claimed other brightly painted doors could be seen in her conservation area neighbourhood.

The mother-of-two, who is a brand ambassador in the drinks industry, moved back to Edinburgh after working in the US for nine years.

She refurbished the house with the last task of having her front door professionally painted.

The written decision will allow Ms Dickson more time to have the work completed in spring but said she should apply for permission if she wanted to choose an alternative colour.

Mr Field added: ‘The guidelines recommend that windows should be painted white or off-white.

‘The conservation area character appraisal recommends that windows be painted white to maintain the unity of architectural schemes.

‘I accept that neither document advocates the use of white paint on front doors.

‘However, I consider white to be a neutral colour and one used on front doors by a number of property owners in Drummond Place without causing an unacceptable impact on the character of the building.

‘On these properties, the white doors also complement the white-painted windows so do not disrupt the unity of the Georgian architecture.’

A City of Edinburgh Council spokeswoman said: ‘The colour of the door is not in keeping with the historic character and appearance of this listed building in the New Town, part of our World Heritage Site.

‘The owner agreed the door would be repainted but as this work has not been carried out we are taking enforcement action requiring them to repaint the door.’